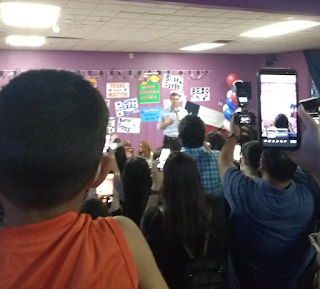 Gubernatorial candidate Beto O'Rourke visited Jett Bowl North on November 18, 2021 to inspire the locals to vote in the upcoming primary/midterm elections.  It was a decent turnout, considering the visit was announced days before, when O'Rourke announced his bid for governor.  The signs that decorated the backdrop were a valiant effort. 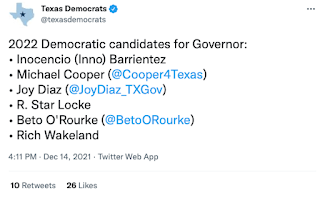 Beto O'Rourke is a dedicated public servant.  He has been quite active since his failed 2018 bid for senator.  He tried to unseat surly Ted Cruz, a man who has done gawd-knows-what during his time in office.  What worries me is that the electorate doesn't know a worthy politician when it's staring it in the face.  Part of it is ignorance (Dems) and part of it is cult dynamics (Reps).

There are six Democratic candidates running for governor this year.  Webb County voters who take part in the Democratic primary will choose Inocencio Barrientez, because he's got a nickname to go on the ballot, and his name is of the Hispanic/Latino persuasion.  That last point plays a major part in how Laredoans vote.  They don't have all the information they need so they go with their gut instinct, or rather, their fondness for the familiar.

In the 2018 Dem primary, Webb County chose Sema Hernandez (10,459 votes) over O'Rourke (8,803 votes), despite Beto having national media coverage and raising millions of dollars for his campaign.

The Texas Tribune (Alexa Ura & Emma Platoff) noted the phenomenon that is particular to border communities when it comes to voting:

It’s an outcome that’s not uncommon in statewide Democratic primaries in which, experts say, Hispanic-sounding surnames go a long way with Hispanic voters when name recognition among primary candidates is low.

A lot has been said of border communities in the Rio Grande Valley trending red in the last general election, but our votes don't seem to come with any hint of sense.  Apparently, Republicans have played a good voter outreach game in our neck of the woods; But what does it amount to when they side  with a candidate who has paid off hookers and swindled people through a now-defunct university?  What does it say about Laredo voters when they go for the candidate that has the familiar surname?

It's bad enough that voter turnout has been dismal, and getting worse, but we can't be screaming that the Democratic party is ignoring us when we make boneheaded choices like this.  I predict Beto O'Rourke will lose Webb County.