Senator Joe Manchin, of no-chingues-Juan-Dominguez fame, told a Fox News bobblehead today that he was not supporting the Democrats' Build Back Better bill.  The bill included money for universal preschool, care for the elderly, and taco stands on every corner.  The whole Build Back Better saga has been in a sort of limbo because of the likes of Sen. Manchin.  Apparently the bill was monetarily bloated and would severely add to the deficit.  Moot points since the bill was supposedly paid for and because no one bats an eye when they approve of the generous defense budget every year.

Manchin and Sen. Kyrsten Sinema have been thorns in the side of Democrats recently.  These two knuckleheads have been impediments for such things as BBB and voting rights legislation.  Henry Cuellar, however, doesn't mind calling Manchin a friend and posing too close for pics with Sinema. 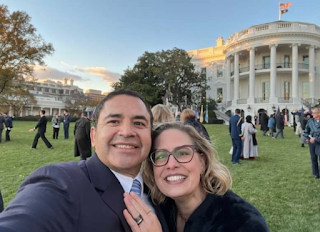 (courtesy photo that I could've done without)

The House of Reps passed Build Back Better with a vote along party lines, of course.  And Enrique (Henry) Cuellar was counting on the federal money reaching his district.  It would've given his campaign more animo until March 1, 2022, the date of the primaries, where he is being challenged by two females. 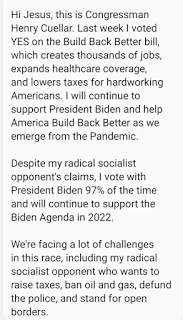 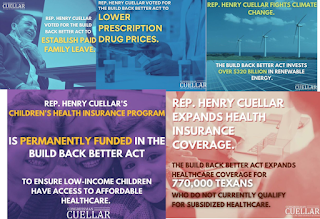 With BBB being kaput, kway-ARE will have to go back to pontificating about supplying bulletproof vests for county law enforcement officials and speechifying against immigrants from Central America.  There is no time to think about what could've been, with only 72 days till the finish line.

The game plan will have to keep its course: go negative against your opponent. 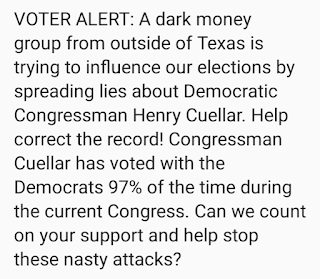 Cuellar has been running an aggressive campaign.  He senses that his political future is in jeopardy.  The electorate has probably caught on to his cynical ways and outdated thinking.  Personally, I think he's overstayed his welcome.  The baggy pant punieta needs to be shown the door.
His gall at calling his opponent, Jessica Cisneros, a socialist is priceless.  Cuellar's whole M.O. is propping up his so-called record of awarding grant money to local agencies.  Cuellar is an anti-abortion, pro-law enforcement, pro-NRA jerk.  That his BBB claim to fame is being squashed by another corporate shill makes for sweet justice.  One lives and dies by their own conservative mamadas.