The Many Works Of Judith Zaffirini 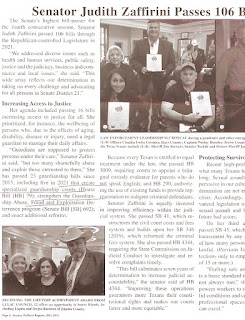 I sometimes flip through the many political newsletters that arrive at the Sanbe news headquarters.  I'll scan some sections and see who's included in the photos, before tossing the material in the recycling bin.  But I felt it was my duty to look into the supposed works of one of our illustrious leaders, Judith Zaffirini. To toss it aside like an old sock would be a crime.  Whatever.

Zaffirini's recent mailer has the headline: Senator Judith Zaffirini passes 106 bills reflecting broad range of issues.  The four-page newsletter includes a sample of the senator's toil up in Austin.  Let's take a look at the highlights.

HB 4477 - relating to the financial exploitation of certain vulnerable adults (TX Legislature Online).  In Z's newsletter it says, Adult Protective Services could not request holds on financial accounts when it suspected exploitation -- HB 4477 eliminates this restriction.  According to TX Legislature Online, Zaffirini was a sponsor of the bill, hence the HB (House Bill) designation, I guess.

HB 3529 - relating to consent for the use or possession of personal identifying information under the Identity Theft Enforcement and Protection Act.  Again, a House Bill and Zaffirini is a sponsor.  In the newsletter, Zaffirini writes about the bill, which amends the definition of identity theft to include coerced debt, thereby allowing survivors to access additional resources.

SB 43 - relating to residential mortgage loans, including the financing of residential real estate purchases by means of a wrap mortgage loan; providing licensing and registration requirements; authorizing an administrative penalty. FINALLY AN ACTUAL SENATE BILL.  But this bill has 8 sponsors, Zaffirini being one of them.  This was Zaffirini's third attempt at passing the bill, according to her mailer.  "It closes loopholes that allowed predatory wrap mortgage lending practices to defraud unsuspecting homebuyers."

Back to the House Bills.

HB 1172 - relating to the rights of victims of sexual assault or other prohibited sexual conduct.  This one was authored by Rep. Donna Howard, according to LegiScan.  The bill had 15 sponsors.  Zaffirini said of HB 1172: These bills will increase opportunities for them to find safety and healing and will incentivize reporting.  House Bill 1172.

SB 45- relating to the prohibition against sexual harassment in the workplace.  The wording!!  This bill came up in 2020; Zaffirini's newsletter points to SB 45 passing on its third try.  It "provides that sexual harassment by any employer, regardless of how many persons they employ, is unlawful.  Not sure we needed this one in writing, but okay.  This bill had 36 sponsors, three attempts and they still couldn't get the bill's title right.  I'll ding LegiScan for that last point.

HB 4344 - relating to a complaint filed with the State Commission on Judicial Conduct.  It was authored by Jacey Jetton.  Sponsor: Zaffirini.  The newsletter notes: This bill culminates seven years of determination to increase judicial accountability.  The commission is supposed to "investigate and resolve complaints" in a timely manner.  This took seven years?!

SB 346 - relating to the participation of open-enrollment charter schools in the Jobs and Education for Texans Grant Program.  Authored by Senator Angela Paxton.  This one is from this year.  But in Zaffirini's newsletter, SB 346 (2019) apparently reformed the criminal fees system.  SB 346 propped up SB 41, "which restructures the civil court costs and fees system."  SB 41 had six sponsors.

HB 290 - relating to the period of continuous eligibility and a periodic eligibility review for a child for Medicaid (LegiScan).  It had 54 sponsors.  In Zaffirini's newsletter, HB 290 is about "authorizing the use of existing funds to provide representation to indigent criminal defendants.  Who's right?

HB 3009 - relating to child custody evaluations.  Three sponsors.  It's a House bill.  But Zaffirini boasts passing HB 3009, "requiring courts to appoint a bilingual custody evaluator for parents who do not speak English."

Zaffirini, or her newsletter editors, claim that the senator passed FIVE guardianship bills this year.

SB 692 - relating to access to certain financial records by the guardianship abuse, fraud, and exploitation deterrence program.  Two sponsors to the bill.

Zaffirini goes on to take credit for ten other House Bills and five Senate Bills.  SB 1216 "allows the City of Portland to hold a local election to expand eligibility for retail alcoholic beverage permits."  Good for Portland, TX!

All of these bills relate to someone.  Not me, but someone out there. 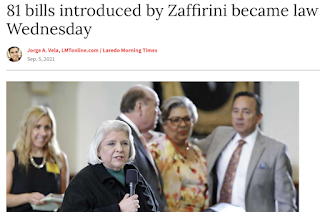 Earlier this month, Jorge Vela of the Laredo Times wrote that Judith Zaffirini passed 106 bills in the 87th Legislature, 81 becoming actual law in Texas.  How many were actually authored by Zaffirini, though?  She may have introduced tons of bill in the senate, but did they originate in the Texas House?  In her own newsletter she has the courtesy to cite the House Bills she sponsored and voted for.  That doesn't necessarily mean she conjured them up.

A lot of it is low-hanging fruit.  The laws that have heft, the ones that affect everyone, not in a good way, are the voting laws, the gun laws, the anti-abortion laws.  Zaffirini was inconsequential in those.  It's not her fault, but her putting up her record of bills passed is negligible.

Zaffirini will be lauded by Laredoans.  Just don't ask them what to applaud her for.  They won't have an inkling what to point to.