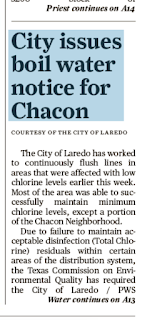 This newspaper clipping appeared in the Laredo Times on Sunday, July 4, 2021.  It was the day before that the city posted the alert on their social media feed.  I found it peculiar that it was my neighborhood that was being singled out.  I thought that the city was getting back at me since I tweeted my concern for crews flushing the lines and there being low levels of chlorine in the system.  Alas, it's not always about me and my paranoid delusions.  It turns out that the resident who summoned TCEQ about the water's integrity also lives in my area.  Go figure.

It was a private citizen who found the problem, again.  Like in 2019, he found some sort of slime building up in his home filters.  Being the thoughtful person he is, he called on TCEQ to look into the matter.  His initiative put the wheels in motion, and ultimately the entire city was placed on a boil water notice. 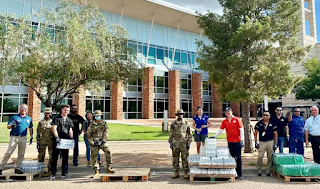 City officials, including District 3 Councilmember Mercurio Martinez helped to pass out bottled water to the public in the days following the boil water alert.  Unfortunately, people like Martinez turned that into a photo op.  As far as I know, he never reached out to the person who found the problem with the drinking water, even though the neighborhood that Martinez represents was the first to be put on alert.

In investigating the matter, city staff dismissed two employees at the water plant on Jefferson.  The city manager and the utilities department director both offered their mea culpa.  The public, however, has asked for City Manager Robert Eads to resign.

The public was told that there was no bacteria in the water.  But we were advised to boil water, meant for consumption, for two minutes.  Doing that is a nuisance in itself, but for businesses that depend on water for their beverages, they had to adjust more than we did.  Fast food establishments were not serving fountain drinks or coffee.  At a couple of places, patrons were served canned soda with their meals.

I'm pretty sure we'll see another event like this in the future.  Laredo has a way of not learning from its mistakes.