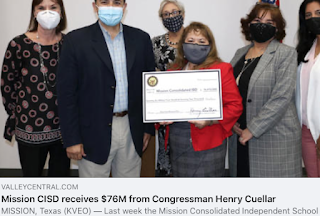 This game that Enrique Cuellar and the media play is tired.  He doesn't have his own treasure chest from which to distribute at his discretion.  Cuellar has to protect his phoney baloney* job as congressman and doing so requires orchestrating photo ops like this.