No Courage In These Characters 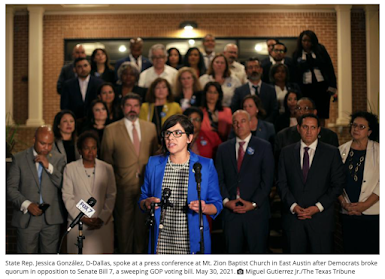 Democratic state representatives walked out of the Texas Capitol on Sunday in order to kill Senate Bill 7 (SB7), the bill that would prohibit voting methods used during the last election in the Lone Star State.  Without the Democrats being present, there was no quorum in the House and the bill did not advance.

The Texas GOP left Democrats out of discussions and then tried to rush the amended bill through at the last minute, at the end of the legislative session.  The walkout was a last-ditch effort for frustrated Dems.

Some of the proposals in SB7 included: limiting voting hours during Souls to the Polls day; doing away with drive-thru voting; adding ID requirements to mail-in ballot voting; prohibiting election officials from sending out unsolicited mail-in ballots; granting more access to poll watchers; and the ability to overturn an election if enough ballots were found to be illegitimate.

Republicans defended their tactics, all in the name of secure elections.  But Democrats saw this as a way to disenfranchise minority voters. 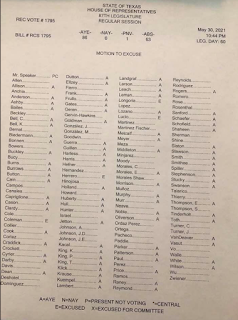 On Monday, Pod Bless Texas tweeted a photo of the roll call vote.  Laredo Twitter-ers noticed that our very own Tracy King and Richard Raymond stayed at the Capitol on Sunday and voted for SB7.  To make it a hat trick, I'll include a third supporter of SB7: Ryan Guillen, a known politico to these parts. 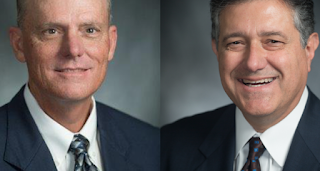 Raymond's vote would've slightly enforced my dislike for him.  His participation in the SB7 vote was not the courageous stuff of his Democrat colleagues.  If Governor Greg Abbott called a special session to revisit SB7, I would not hold out hope for Raymond and King.

But just when I thought that things would die down for a bit, Raymond took it up a notch.  He spoke to  Ashley Soriano from KGNS on Tuesday to voice his concern for SB7:

It's all being driven by what is commonly referred to now as a big lie. Donald Trump lost the election last year, he wouldn't accept that.  That has led to movements to introduce bills like Sentate Bill 7 here in Texas.  It's not only an overreaction, it goes against the grain of what this country is about.

The walkout by Democrats was met with applause by those on the left.  Voting restrictions are being championed in other states and TX Dems (not our weasely pendejetes) showed that they can outmaneuver Republicans just fine.

Senate Bill 7 may come up again if the governor has anything to say about it.  If it does, I know how our representatives will vote.  Many in Laredo have no trust in their politicians.  Duplicitous Richard Raymond has shown us why.