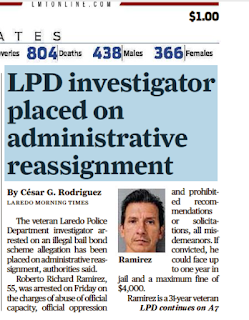 A veteran of the Laredo Police Department was arrested Friday and charged with: abuse of official capacity, official oppression, and prohibited recommendations or solicitations.  Roberto R. Ramirez allegedly advised a person, who had an arrest warrant pending, to use a particular bail bond company.  If the person did not cooperate, Ramirez threatened the delinquent with a higher bond amount and/or federal charges.

Ramirez is not the first law enforcement official who has been busted for abusing his power.  In 2014, Justice of the Peace Ricardo Rangel was arrested for soliciting bribes in return for reduced bonds.

And in the mid-1970s, jail employees Sgt. Erasmo Rodarte and Raul S. Lugo, along with Commissioner Alfonso DeLaGarza, were embroiled in a bribery scheme.

The local district attorney is facing an investigation himself but that's for being a pervert, ostensibly.

Posted by KeyRose at 2:06 PM No comments: