Temperatures took a dive last weekend as a result of an arctic blast phenomenon that affected all of Texas.  Laredoans were excited about the possibility of seeing snow fall -- a welcome change for locals that are used to an abundance of hot weather.  The situation quickly soured as roadways were closed off to drivers and the power went out.

Our secluded border hamlet has seen extreme weather events in the past.  This was something else.

Sunday, February 14, 2021: The high was 35 degrees fahrenheit and the low was 18.  TxDOT started treating I-35 as ice was expected on roads.  Some overpasses were closed by city officials.  We were advised to conserve electricity and to expect outages.  Shelters that became available for the public were: Bethany House, the Salvation Army and the Holding Community Center.  Snow flurries were spotted throughout town.  A multi-car pileup occurred on Loop 20 after dark, near the City Hall Annex building. 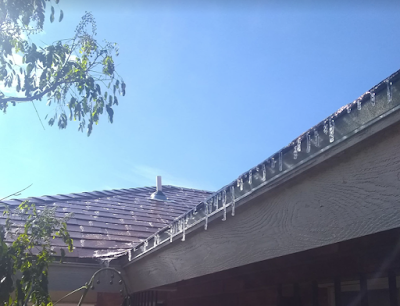 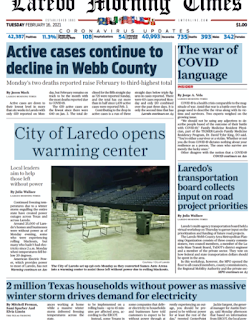 The City of Laredo opened the Sames Auto Arena as a warming center, providing shelter from the cold. 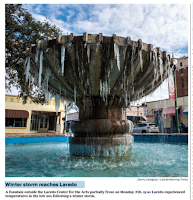 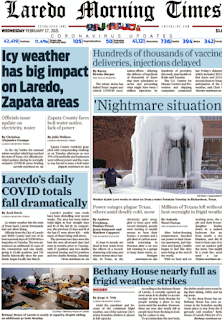 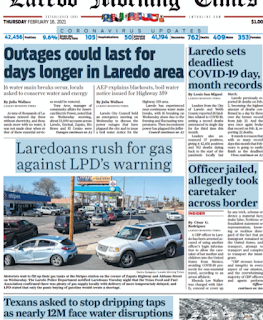 Abbott doesn't know when Texans will have water or power. (Texas Tribune) 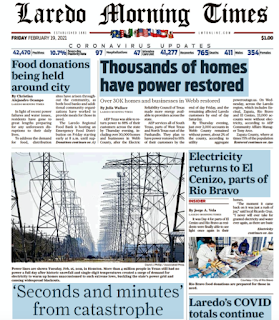 Rick Perry said that Texans would rather freeze than impose regulations on Texas' energy grid.

Ted Cruz flew to Cancun with his family and left his dog home alone.

Beto O'Rourke, with volunteers, made calls to check in on people without power or water.