The Song And Dance Is Over 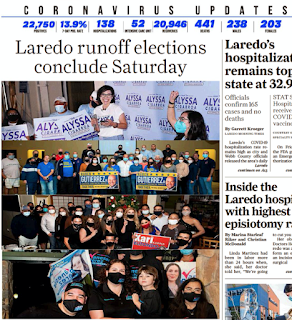 Ruben Gutierrez is the new District 5 council member, replacing one-term incumbent Nelly Vielma.  Gutierrez was interviewed on KGNS last night and said something to the effect of, the people are tired of the same old politics.  That's funny, considering that he took $23,000 from the Fire Department PAC and $9,000 from the Laredo Police Officers Association to fund his campaign.  One thing that's ingrained in city hall's functioning is the pay-to-play schemes.  Local first responder unions have made it a habit of backing candidates and they expect reciprocity when their contracts are renegotiated.

Congratulations, Mr. Gutierrez.  You're a part of the game and you haven't even been sworn in yet.

Outgoing District 7 council member and political martyr George Altgelt will be replaced by newbie Vanessa Perez.  She edged out veteran Betty Flores.  Flores face-timed with KGNS' Ruben Villarreal last night, while eating fajitas at the Firefighters Union Hall.  This union-backed candidate lost her bid, but won our hearts with her online video mastication. 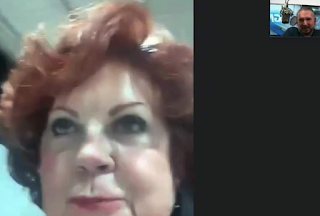 Making history was write-in candidate Alyssa Cigarroa, daughter of local cardiologist, Dr. Ricardo Cigarroa.  She rode the family's coattails to victory against a defective Roberto Balli.  Balli could've ridden off into obscurity, without leaving a trace of actual progress for District 8, but he managed to rack up a list of questionable activities that should be studied in the coming months.  And I may just do that. 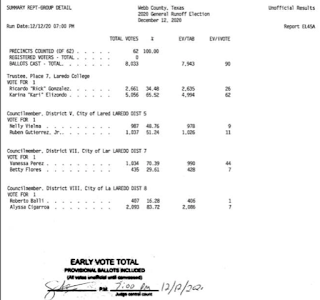 (Brenda Camacho from KGNS posted the results of the races on her FB feed last night.)

One last thing I wanted to mention about election night is the gatherings that took place after the polls closed.  In the Laredo Times photo above, you can see the candidates mingling with MANY people, NOT social distancing and probably violating the city's curfew.  Covid-19 has brought us a worrisome spike in cases and both hospitals are experiencing high census numbers and staffing issues.  Candidates didn't want the virus to spoil their campaign activities, though.  Win or lose, they were going to go celebrate the end of the political season.  I hope and pray for them that no one gets sick now.