Person Of The Year: El Balli 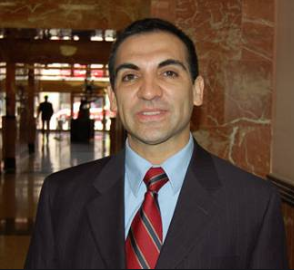 Laredo attorney and man who pronounces his last name like that of an Indonesian province, Roberto Balli, is this year's Person of the Year.

Earlier this month, Balli was dealt a crushing and well-deserved blow to his political career: he lost his re-election bid to a write-in candidate.  Sure, that candidate came from a respected family and had plenty of resources to beat an unscrupulous incumbent, but those are the breaks in local politics.  Serves him right.  Balli treated his female challenger with the same contempt that Henry Cuellar used against Jessica Cisneros.  There was nothing honorable about his attitude.

But apart from his boorish behavior, Balli was embroiled in a scheme that should be a topic of discussion today.  People went on record to state that the former ferret face council member, along with firefighter union members, solicited votes from District 8 residents as they went around distributing bags of food. The food packages were paid for with federal money.  Balli, of course, denied the allegations that his actions were nefarious.  That plan failed to win him another term; he is now history.

Far be it from me to drag Balli's good name through the mud.  I mean, it's not like the man did the same thing before -- rounding up needy people and showering them with gifts, in return for their votes.  THAT'S NOT HIS M.O.!!! 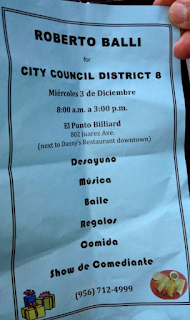 Balli's legacy as District 8 council member does have its merits.  He hosted a mean movie night event at St. Peter's Plaza.  He installed a gym space and food panty-like store at the Southern Hotel, after the downtown HEB closed.  He signed a steel beam for the outlet mall downtown.  He landed on the FBI's target list of public officials suspected of corruption.

And he went along with buying expensive property from political insiders, instead of pushing for the use of vacant, city-owned spaces for the relocation of the Planning & Zoning Department.  Oh! and he named a downtown building after his campaign manager.

Balli kept busy.  But now he can ride off into the sunset and rest on his laurels.  He can take a load off from having to constantly insist that he really did live in District 8, and not at his lavish north side estate.  He can let go of having to keep public records private, because he used to be a highfalutin attorney and NOT because it showed that he was using a fake homestead address to gain favor.

Balli did more dubious things in his short stint than most politicos do their whole careers.  And it looks like he'll go unscathed.  I would say so long to him, but I have a feeling we haven't seen the last of Roberto Bali.  Thanks for the memories, sir.  You showed us how the game is played.  The old patron system is long dead, but you kept the spirit of their immoral character alive.  And for that, you are La Sanbe's Person of the Year.

Bravo, Mr. Balli, or Bali, or whatever the fuck your name is.

Email ThisBlogThis!Share to TwitterShare to FacebookShare to Pinterest
Labels: Person of the Year, Roberto Balli