A Little Something For Everyone 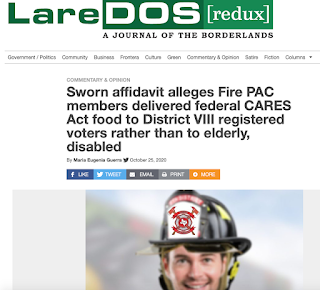 Local print media has done a great job of exposing the suspicious relationship between Councilman Roberto Balli and the Laredo Fire PAC organization.  They are under scrutiny for allegedly assisting the Laredo Regional Food Bank with deliveries in District 8 and telling the food recipients that Councilman Balli was responsible for the assistance.  People who were paid a visit by the PAC members and Balli were asked for their votes.  The General Election, in which Balli is facing several challengers, is scheduled for November 3, 2020.

The food that was packaged into bundles was purchased by the food bank with CARES Act funding.  City council approved that federal funding for the non-profit agency. 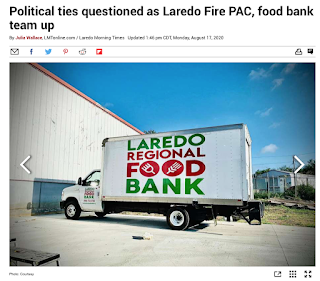 Apparently, the Laredo Fire PAC had helped the food bank before, but what called this occasion into question was that the food deliveries were almost exclusively made to registered voters in Balli's district. 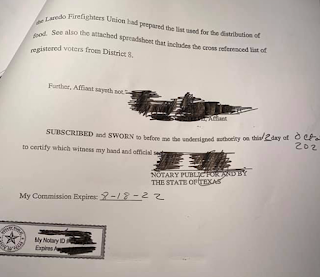 In an affidavit presented to city council, people vouched that they were led on by the PAC members and Balli, either to misrepresent information or to reward Balli with votes.  The notarized statement was delivered to city hall by a local activist and posted on Facebook by Our Laredo.

Props to the writers and local activists who have shed light on this matter, one that could have deleterious consequences for our community.  I can only bow to their masterful efforts and humbly compose a timeline of events, as a lowly blogger is prone to do.  I give you TIMELINE #8:

Firefighters take leave hours and pay in order to help the Laredo Regional Food Bank. They also collect pay from the union for the off-duty activity.  Spouses, too, are hired by the union to deliver food.

July 2020: Firefighter Daniel Perez offers Lorena Gomez the job of delivering food to people. Perez would prepare talking points for those who made food deliveries: vote for Balli.

August 2020: Gomez was employed by the Laredo Fire PAC.

Perez also told Lorena Gomez, other PAC members, and their wives to take bags of food for themselves.

Paychecks labeled with "Food Drive #8" were handed out by firefighter Andy Mendoza.

Apart from delivering food to private, needy citizens, it was also delivered to: Roberto Balli's wife; a campaign worker who lived at 1415 Sanchez; and Balli's campaign manager Martha Narvaez.

August 10, 2020: Lorena Gomez was let go by the PAC, supposedly because she did not support Balli's campaign. That same day she was hired by the Alyssa Cigarroa campaign, a competitor to Roberto Balli.

The Laredo Regional Food Bank broke ties with the fire PAC after getting word of the nefarious details.

City staff start an investigation into the misappropriation of funds

September 28, 2020: Veronica Villarreal (political precinct boss) told private investigators (Sepulveda and Winterroth) that she received several bags of food from Balli himself. She, however, did not support his re-election campaign. Villarreal gave the food to her neighbors, instead.

Councilman Balli delivered bags of food to several locations. (food recipients attested to this in an affidavit)

October 5, 2020: investigators compared the list compiled by the fire PAC to the names of registered voters in District 8, Balli's district. An overwhelming majority of those on the PAC's list were voters from the councilman's district.

Union President David Gonzalez avowed that PAC members were to identify themselves to homeowners as firefighters and that Roberto Balli asked for the PAC's help. Furthermore, he said that food deliveries were to be attributed to Roberto Balli.

October 19, 2019 council agenda item: discuss the saga of the food packages and its delivery people.

City staff said it was not done with its investigation.  Council voted to NOT have city employees participate in partisan activities. Local activists helped to spread the word regarding the contents of the affidavit. 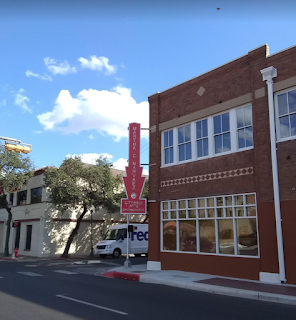 Posted by KeyRose at 5:25 PM No comments:

The Days Seem So Long 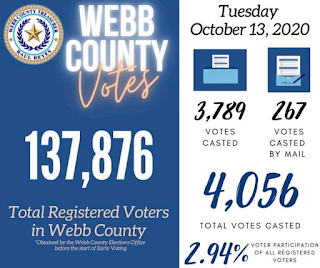 On the first day of early voting, October 13, 2020, there were a total of 4,056 votes cast.  People posted on social media photos of voters lined up at the Laredo Fire Department building on Del Mar and at the City Hall Annex.  While it's a decent number, it doesn't compare to the record-breaking counts that were seen in other Texas cities, such as Houston.

Joe Biden has a double-digit lead in polls, over Donald the con artist.  Texas may be in play.  If the current White House occupant lost Texas, there would be no path to victory, whatsoever.

19 days to go until the General Election.  There is a pandemic going on.  Flu season is upon us.  (Already got my flu shot.)  And a mediocre female judge is on the verge of being installed to the Supreme Court, to fill the position left vacant by Ruth Bader Ginsburg.  Crazy times.

Yesterday was the last day of early voting in Texas.  A total of 54,000 votes were cast in Webb County during early voting.  Webb has almost 138,000 registered voters.  Texas overall has seen record turnout; and younger voters, between the ages of 18 and 29, are fueling the current surge.  The 2nd/3rd wave of the Coronavirus pandemic is in progress, so it's impressive to see people standing in line, for hours in some cities, to cast their vote.

Posted by KeyRose at 6:55 PM No comments: