The Money Is Not Quite There Yet 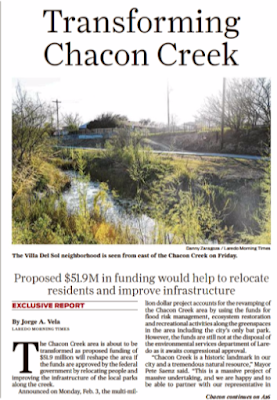 Federal funds, which have not yet been secured, are being tagged for major work along Chacon Creek.  Henry Cuellar and city officials held a press conference, on February 3, to announce the millions of dollars that are expected to fund the creek's restoration.  Press conferences like these bolster everyone's image.  We're supposed to think that elected officials are constantly hard at work for the community.  Let's just hope everything falls into place.

$14 million will go towards flood risk management, which includes buying out about 73 property owners that have their homes too close to the creek, where flooding is prevalent.

The people whose homes are bought out will be allowed to relocate wherever they want and receive relocation assistance to help pay for their new home by taking into account how much their property is worth along the creek.  The process is expect to be all voluntary, but imminent domain can be used by the federal government for anybody that is reluctant to sell.

Translation: nobody is going to get Canseco House, or downtown office building, kind of money for their property, not like political insiders are used to getting.  Residents along the Chacon Creek will be lucky if they're offered $150,000 for their homes.

I hope city officials, and the councilman representing this area, especially, are transparent in their dealing with the people that will be relocated.
Posted by KeyRose at 2:38 PM