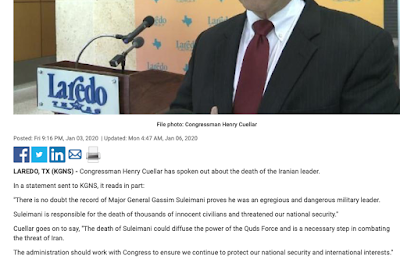 Last week, a high-ranking Irani official was killed by an airstrike ordered by Donald Trump.  The death of Gen. Qassem Soleimani was followed by concern of the retaliation that would be directed at U.S. forces abroad.  Criticism of Trump arose from acting hastily and from not consulting Congress about the attack.  Henry Cuellar, currently in the middle of being primary'd, said this about the killing of Soleimani:

There is no doubt the record of Major General Gassim Suleimani proves he was an egregious and dangerous military leader.  Suleimani is responsible for the death of thousands of innocent civilians and threatened our national security.  The death of Suleimani could diffuse the power of the Quds Force and is a necessary step in combating the threat of Iran.  The administration should work with Congress to ensure we continue to protect our national security and international interests.

Cuellar went straight to the boogeyman description and rationale, instead of raising any concern about the inevitable pushback by Iran.  Republicans were doing the same in the days following the killing of Soleimani. 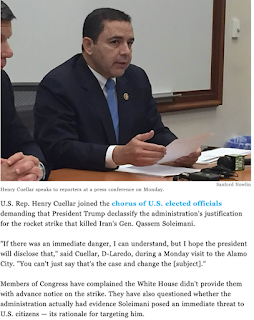 Today Cuellar was in San Antonio to speak of the millions of dollars that were dedicated for projects around military bases.  (Photo/story via the San Antonio Current.)

In San Antonio, Cuellar took on a different tone regarding the strike against Qassem Soleimani:

If there was an immediate danger, I can understand, but I hope the president will disclose that.  You can't just say that's the case and change the subject.  I'm hoping the president can be more cooperative.  My thing is the United States cannot be a lone cowboy and patrol the world.

A different tone and a different posture from the congressman.  It's interesting how Cuellar appears deflated at his press conference in San Antonio.  In Laredo, when he has a press conference, there is a lectern -- sometimes emblazoned with a congressional seal -- and there are numerous local officials by his side, all fawning at the congressman's grand exploits.  In San Antonio today, he had to do with a retired military official and no props.

Cuellar is incredible at showboating when he's in town.  And local officials are all too eager to oblige him with his theatrics.  It seems that no one ever questions Cuellar's beliefs or his tactics.  Because of that, he can get away with a middling statement in regards to an act of war in our name.

UPDATE: I posted a tweet about Cuellar's press conference yesterday and Colin Strother took exception.
Posted by KeyRose at 6:41 PM