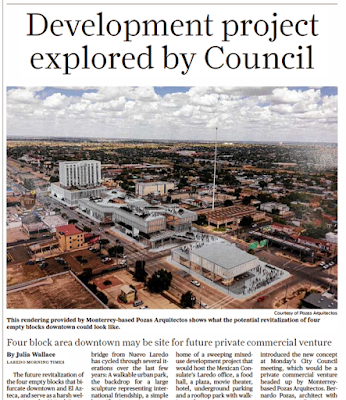 A new plan for downtown has been unveiled, courtesy of a Mexican architectural firm.  I haven't been paying close attention to all that city hall has been up to in recent months, but I thought that the empty city blocks near bridge 2 were going to be spruced up and maintained as open spaces.  I can't believe that the aim is now geared towards a string of buildings that may have a hotel, a movie theater and a park.

I don't even want to guess at the amount of money that was paid to the designers to come up with the artistic rendering pictured above.

Any plans of me writing a book about corrupt Laredo politicians have just been shelved.  Instead I'm going to develop a coffee table book about all the artist renderings that have been proposed for our downtown area.  Images to be included are of: the Kell-Munoz master plan of 2011; the convention center next to La Posada Hotel; the bulkhead/border wall along the Rio Grande; ferris wheel; and now the campus-like schematic at the I-35 terminus.

Nine years ago, a similar plan was put forward.  The same amenities are being proposed now: retail, entertainment and public space.

The city namely Roberto Balli can't get decent landscaping for the handful of blocks near bridge 2, but now we're supposed to believe that the downtown district is going to be transformed completely because an architect came up with some drawings?

In 2012, Les Norton was really blunt about the revitalization plan that the city was pursuing.  He questioned the city's motives and the perks bestowed upon city leaders.

If by some chance this new plan were to become reality, we cannot even begin to imagine the challenges that such a construction project would pose. 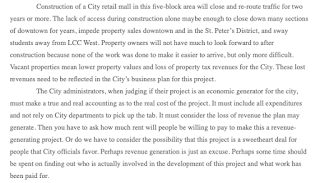 City hall has had some dubious dealings with architects in the past.  Alas, a new one has entered the picture.  Let's not hold our breath on miracles happening in our near future.
Posted by KeyRose at 8:15 PM