Trees Will Grow If You Let Them 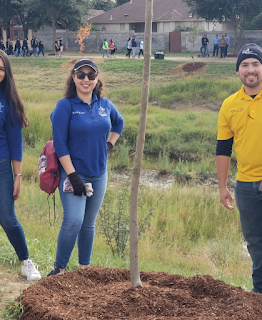 City officials invited the public to a tree-planting event billed as the "Return of the 100 Acre Woods." It took place Saturday at North Central Park.  The park is ten years old, according to details released by organizers.

In 2010 I wrote about this same kind of event, back when Gene Belmares was in office.  Man, that's like two political weenasos ago.  Belmares wanted to create an environment where the 'foliage will change color in the fall, creating a true "New York Central Park" feel' for outdoor enthusiasts.

One tree that does well in this climate and has a remarkable fall foliage is the Chinese Tallow.  You can spy one at the northeast corner of Clark and Meadow.  I digress. 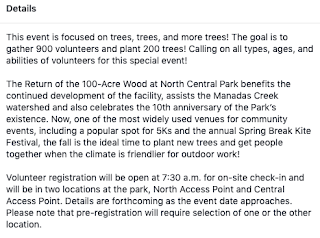 I love that Laredoans help in giving public spaces some TLC.  It's a win-win for everybody.  The thing I take issue with is that outdoor settings are over-managed.  With trees, especially, only several types are planted.  Outdoor design in Laredo ends up being predictable and sparse; and locals try to create scenes that are not natural to our area.

In the photo above, you see volunteers gladly posing next to a new planting.  (Mulch should not suffocate the base of the trunk.)  Close behind you see a small native tree, probably a mesquite.  That tree will likely be mowed down, in due time, to keep things tidy.

A true 100 acre woods, I think, would do well by having native trees alongside hand-picked varieties.    Letting native trees mature can save a lot of energy and money.  And ten years from now, when the city hosts another 100 Acre Woods shindig, the park won't look as bare as it does in the photo above.

Our approach needs to change.  And it wouldn't hurt to have an arborist's input in all of this.
Posted by KeyRose at 3:36 PM