Paying Off Their Donors 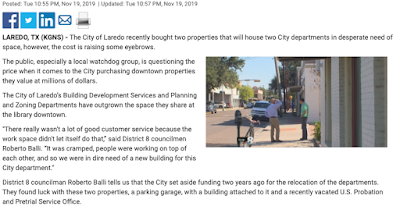 The City of Laredo has apparently purchased more properties in the downtown area, along Houston and Santa Maria Ave.  The rationale for doing so is to provide space for two departments that are currently housed at the Bruni Plaza library: building development and planning & zoning.

The now-former owner of the properties was a political insider.  He has made out like a bandit.

The city owns other properties downtown, but they can't be used for needed office space because they're already spoken for, according to Councilman Balli.  According to him, they've got things lined up for: the Plaza Theater, the old federal courthouse, the Southern Hotel, the Canseco house, the Slaughter house, etc.

It's been six years since the federal courthouse was donated to the city.  I have no idea what it's being used for, other than a police substation.

The Plaza Theater has sat vacant for about two decades.  It's basically laying there in waste.

It's been three years since the four vacant blocks near bridge 2 were going to be spruced up.

Property after property is acquired by the city and they just sit there.
Posted by KeyRose at 7:19 PM