In early July we heard of the brilliant plan of placing a ferris wheel next to the Outlet Shoppes downtown. 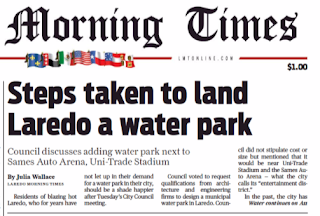 On Tuesday, city officials got to talking about plans for a water park.

These two public amenities are, for now, just wishful thinking.  Them becoming reality is too far off.  The mere mention of a ferris wheel near the Rio Grande and a water park next the arena sounds promising.  What the public should put more thought into, though, is the completion of the detox center and the veterans museum.  It can't all be about the sexy.
Posted by KeyRose at 6:37 PM