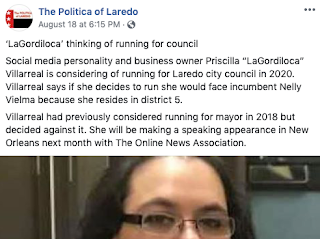 Last weekend, word began to spread about a certain social media somebody that was thinking about running for city council, District 5.  She, who I don't follow on Facebook, is toying with the idea of running against incumbent Nelly Vielma.  Decent and mediocre candidates have always been drawn to public service in our area.  This aspiring politician, however, does not even rise to that level.  She's crass, toils in gossip and sensationalism, and has admitted to having no actual knowledge of the inner workings of municipal government.

The only currency she has to her name is the ignominy related to her past and present legal problems.  The numerous stains on her reputation would make her one of the guys with the rest of city council.

For those unfamiliar with local politics, city hall has seen its fair share of bad actors: pols who have been busted with drugs and those who push people around.  And let's not forget the FBI raid of city offices that may or may not see the indictments of elected officials.  It's a pool of ne'erdowells at 1110 Houston St.  Candidate X would fit right in if she decided to jump in. 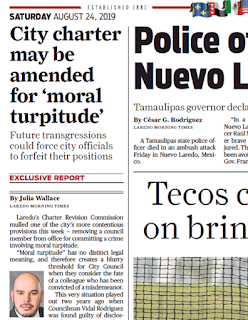 Julia Wallace wrote about the possible amending of one city charter item -- the one dealing with asshole elected officials who commit some type of wrongdoing.  Those that crime it up will be guilty of moral turpitude.  This official language became part of our lexicon, thanks to the twice-elected council person that made one hell of a boneheaded mistake as a candidate, Vidal Rodriguez.  He's one who, despite his failings, convinced his voting public that he was the right man for the job.

The new baldheaded contender, the one who has Vielma in her sights, might do the same: convince several thousand people that she's the better candidate.  She may have a huge following on social media, but how many of her District 5 followers will actually cast a vote for her?  It's all hypothetical at this point.  We hardly know if she's going to take a crack at local office.  She should take into consideration the current discussion being had, that of torpes committing moral turpitude and the potential for their disqualification from office.  I doubt she's privy to what's currently being discussed, in terms of city charter amendments.  I don't see her as a page 1 peruser.  She deals more with the police blotter section, an area that she's personally close to.

Posted by KeyRose at 3:39 PM No comments: 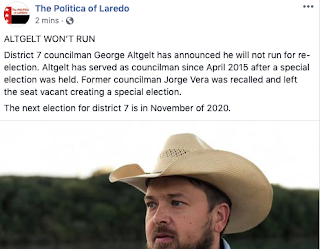 Early last month, the Laredo Times reported that George Altgelt would not seek re-election in 2020.  I thought the issue was a non-starter since he was elected twice to the same post. 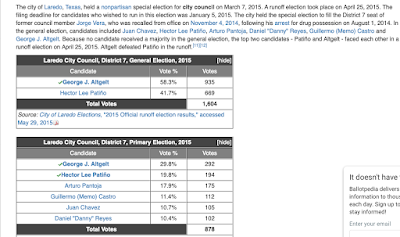 Altgelt was elected to serve as councilman of District 7 when he won a runoff race on April 25, 2015.  Results above courtesy of Ballotpedia.org.  Altgelt replaced Jorge Vera, who was recalled from office in the fall of 2014.

There was some language added to the city charter, relating to the Terms and Limits of a council member.  That resulted from Jose Valdez Jr. deciding to regain control of his District 7 seat after having quit his position to run for mayor.  He didn't win in that venture.

Valdez Jr. was elected a third time, to serve as city alderman, on May of 2008.  He would only get to serve out two years from his incomplete 2nd term, after a judge ruled on the matter.

Altget's case is different, given the extraordinary circumstances that preceded his first win.  He was elected to the same position twice, though.  The city charter may have to be amended one more time, seeing as how kooky things are around here.
Posted by KeyRose at 3:17 PM No comments: