The city's ethics* commission met yesterday at 5:30 p.m.  They started with roll call and then listened to public comments.  At 6:00 or so they went into executive session.  The meeting resumed at a quarter to 7.

Two members of the commission recused themselves from the proceedings because of a relationship with a family member and a sitting councilman.

The purpose of the meeting was to give Lakshmana Viswanath and Victor Gomez-Marquez an opportunity to state their case, to detail the validity of their previous complaints.  The complaints that "Vish" and Victor submitted were dismissed by the commission last month.  Last night it was ultimately determined that Viswanath's and Gomez's concerns were frivolous. "Vish" was hit with a $500 fine and an order to pay attorney fees for the city.

Both of our citizen activists got to this point because their plight fell on deaf ears: those of the mayor, city council and the acting city managers.  I can't imagine that "Vish" and Victor ever thought that they would be the ones to be put on trial by the ethics commission, much less have to pay fees incurred by the city.

Acting Co-City Manager spoke to the LMT about the decision of hiring outside counsel:

The reason why we had to get an attorney is because typically it is the city attorney being the representative for the commission.  But since she works for us, she had to step back, and we had to get an outside party to come in.  So, when you make a claim against either one of us, we must get an outside party.  And somebody has to pay restitution to the citizens because taxpayers are paying Henry with now.

Victor Gomez-Marquez complained to the city that Councilman M. Martinez left out important details in his campaign finance forms.  And Lakshmana Viswanath complained to city officials that their decision to impose new water rates on the public for infrastructure expansion was wrong.  Their contention was that individuals at the city level acted in bad faith, by ignoring sections in the City Charter.  City officials acted unethically, if you will.

It's unclear what the members of Our Laredo ("Vish" and Victor) will do next.  What I can do is petition my representative to put forth a motion to waive the sanctions against "Vish." 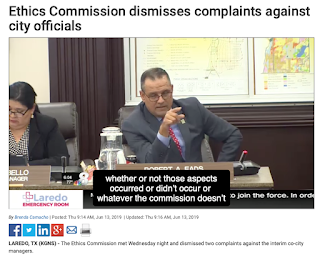 When Lawrence Berry and Aldo Tatangelo took on city hall in the 1970s, they had the backing of the Laredo News.  They were able to make the case that city officials were mishandling public funds and abusing their power.  What we have today is the Laredo Times sending their sports writer to report on a complicated case that could possibly result in the city facing a lawsuit.

This is a big story, one that should reach the ears of people outside of Laredo.  It's obvious that our city government is dysfunctional, and yet, the only ones that are facing any serious backlash are those that are speaking out against it.  There are a lot of bad actors at city hall, and we are at their mercy. 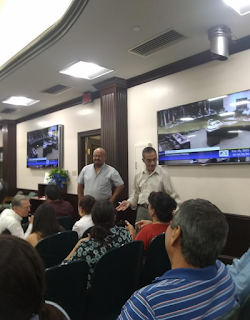 Victor Gomez and "Vish" thanking supporters at city council chamber.
Posted by KeyRose at 11:39 AM