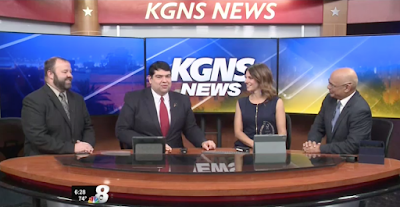 KGNS anchor Ann Hutyra read the news for the last time last night.  She lead off the ten o'clock telecast, and went about the business at hand: reporting the day's events alongside Jerry Garza and Ryan Bailey.  It was a straightforward presentation, except for the ending.  For the last five minutes, Ryan and Jerry said their goodbyes, and ran a montage of clips and still shots from Ann's career in local TV journalism.

Afterwards, an emotional Hutyra thanked her colleagues and expressed gratitude for the viewers who shared their compliments and concerns with her in public.

I spoke to Ann today about the moments that lead up to her last newscast.

"I tried not to think about it too much.  I knew that it was going to be an emotional evening for me, having been in that career for so long.  I was trying not to hype it up for myself; I tried to treat it just like any other newscast.  It was bittersweet from the beginning.  As I started the opening line in the newscast, that thought did go through my head, that this is the last time I'm going to be doing this."

Before being a local media personality, Hutyra visited Laredo, TX with her then-boyfriend in 1998.  At that time she couldn't foresee making a place for herself here.  She was busy at Our Lady of the Lake in San Antonio, learning the skills to become a journalist, her lifelong dream.

That dream started with a childhood curiosity and a voracious need for news and information.  The idea of becoming a writer arose in her teenage years.

"Watching the news with my dad, that was a regular thing we did in my house.  We talked about current events.  I was 13 or 14 when I said, I think I should be a (print) journalist.  I didn't have an interest of being on TV.  I've always been very shy.  I decided eventually to major in broadcast journalism.  The whole TV aspect came later on in college when I was in front of a camera."

Hutyra took part in an internship with TV Azteca in Queretaro, Mexico.  During that process, she became immersed in the Spanish language.  That training in part explains her ease with Spanish pronunciation.  She said that it was also through relationships with friends who spoke the language that helped her.

"I got used to that early on, going to college with a majority Hispanic population, and most of my friends spoke Spanish.  I knew it was important to learn a second language.  With Spanish being a popular language, I thought it would be important for me and my career."

In 2004, while having sent out resumes for work, Ann remembers her husband speaking to Richard Noriega, who was then with KVTV, the CBS affiliate in Laredo.  He told Noriega that Ann had been looking for work; Soon after, she would find herself as producer for the news station.  Within a month of starting her new job, she would be anchoring the noon newscast.  It was a newfound challenge, steeped with anxiety and issues that made it almost impossible to present good work for the public.

"I didn't know how to apply everything that I learned in college to an actual TV station.  An internship only prepares you for so much.  When you're thrown in there, you have to learn as you go along.  Early on I was doing a lot of the behind-the-scenes prep work for the newscast.  There were five of us; It was very small. Every day was a mad scramble to try to get a newscast on the air.  I learned how to get a lot done with very little resources.  Our cameras were horrible. We were always running out of tape.  Our computers were always breaking down. We had challenges every single day."

Ann credits Richard Noriega with giving her her first chance at becoming a journalist.  At KVTV she worked with Noriega, Cristina Castle-Garcia, Angel Ortiz, and Colin McElroy.  After two years of gaining professional experience there, however, she was told that the station was ending their newscasts.  Ann and the rest of the news team were out of a job.  She was devastated.

Enter Mary Nell Sanchez, News Director at KGNS.  She was the person who called Ann, almost immediately, to come work for Channel 8 (10 on cable).  That was 2006.  Over the next decade, Ann Hutyra would become a household name.  It was at KGNS that she would help to host the Jerry Lewis Telethon, a fundraising event that helped kids with Muscular Dystrophy. 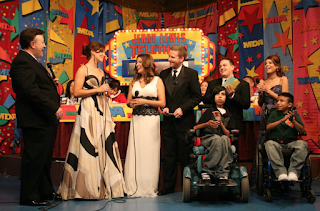 And it's at KGNS where she -- along with Roger Uvalle (producer) and Renee Santos (reporter) -- received an Emmy nomination in the category of Team Coverage.  They were recognized for their story: Donald Trump At The Border.

This honor was a first for the news station.  Ann would travel to Ft. Worth for the ceremony. 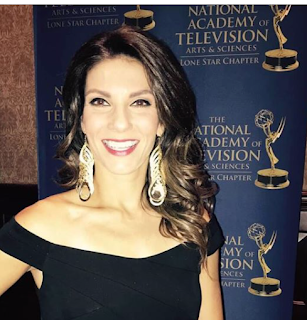 Ann has seen a lot of changes in journalism over the years, one being the impact that social media has had on the industry, something that she says will continue to evolve.  "You have to be ready for change."  She's seen faces come and go through the newsroom, a reality that Ann says is due to people's perception about the border region, or their reluctance to engage and care for the community.   She realized the kind of impact one can have as a journalist.  An event that left an indelible mark on her is the severe flooding that affected the residents of west Laredo several years ago.  She and the KGNS family would go on to host a week-long donation drive to help the people affected and displaced by the flood.  She remembers the coordinated effort that was put together and the appreciation that the families gave in return.

I asked Ann for words of wisdom for anyone wanting to be a journalist.

"The most important thing to know is why you want to be a journalist.  If your main objective is that you want to be on TV or you want to make a lot of money, you want people to know who you are, that is not a reason that you go into journalism.  You have to know what your values and your ethics are; And you have to stand true to that or else people will see through you."

The next chapter for Ann Hutyra will be in the field of holistic nutrition, which she has studied for in recent years.  This came as a result of her own 7-year battle with Celiac Disease.  She heads a support group for the condition in Laredo that has grown to 90 members.  In her new job, Ann will be helping clients with specific dietary needs, while maintaining her residence here.  An out-of-town move may be in her future, however.

Ann will miss telling people's stories.   Family, a new career and her love of the outdoors will keep her busy in the meantime.  We wish her well.
Posted by KeyRose at 9:00 PM