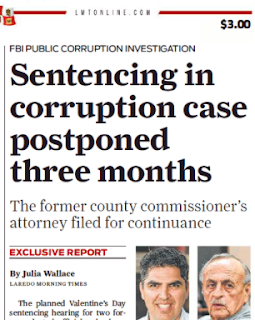 Disgraced Webb County Commissioner Jaime Canales and Johnny "I had to compensate for my height" Amaya were supposed to be sentenced on February 14 for their political dirty dealings.  Their judgement would get delayed on that special day of love.  This morning we learned that they may be free men for the summer, as their sentencing is once again postponed 3 months.  Memorial Day plans HERE WE COME!  (also Mother's Day, Father's Day & 4th of July) 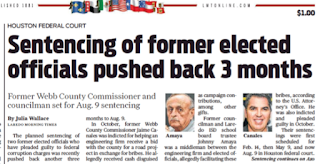 For two years, "Canales accepted checks disguised as campaign contributions plus meals, entertainment and the use of a co-conspirator's Padre Island condo - together totaling in excess of $10,000 each year."  (Julia Wallace, Laredo Times)

The Times writer mentions the process by which Canales, Amaya and a Dannenbaum Engineering representative carried out their scheme: the drafting of policy by the company stooge, request-for-qualifications votes by the commissioner, change orders, etc.

Canales voted for projects that would benefit the engineering company, including the Hachar-Reuthlinger Road project.  Amaya acted as the middle man.  (Quote below via the LMT)


Amaya allegedly provided these bribes to Canales and other officials which were all reimbursed by the corporate funds of the engineering firm, according to the feds.

We just passed the 2-year mark when city hall, as well as Canales' office, was raided by the FBI.  But here we are with only Canales and Amaya facing jail time.  Seven city officials were named as FBI target subjects back in 2017.  Does the sentencing delay mean that more indictments are coming soon?  Could it mean that Amaya is cooperating with federal officials and will end up naming names?  Public comments on social media seem to suggest so.

Dannenbaum executive Louis Jones Jr. committed suicide in October.  The only witness the feds may have now is Johnny Amaya, the go-between in all of this.  He may be the metaphorical little bird that tells on the other crooks skulking about our fair city.

Image to the left is a screen grab from the Laredo Times front page, August 4, 2019.  LMT: Sentencing pushed back for Canales, Amaya on federal corruption charges.

Sentencing has been delayed until November 7, 2019 in Houston.  That's because "the government has not finished their investigation, said the two defense attorneys on the case."  (Julia Wallace)

The judge needs to have an overview of everything that happened in the case, and the government has not finished their investigation.

You don't want to sentence somebody and then find out that something else happened that could affect the sentence.  That's the theory behind waiting.

Everybody wants to know: who are the other actors?  What's going to happen?  I have no idea.

Man I hope there are officials from city government that get indicted, in regards to this case.  That may be sadistic thinking, but there's no way that everyone at city hall can be innocent bystanders.  Until November we wait.  Do your best, FBI.

Engineer tied to FBI probe has suicide verified: LMT
Posted by KeyRose at 5:45 PM No comments: