Where Is The Emergency? 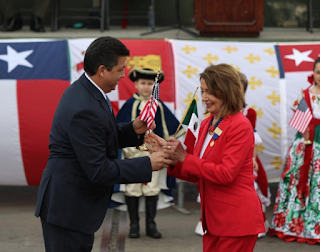 Nancy Pelosi was in town a couple of days to take in the sights and to speak out against Donald's plan for a border wall.  The Speaker of the House: was a guest for students at TAMIU; gave statements at the Lincoln-Juarez Port of Entry; supposedly attended the Martha's ball; and took part in the abrazo ceremony on Bridge 2.  Somewhere in there she did a little fundraising too.

U.S. House democrats have said that new funding for a border wall is non-negotiable.  The project pushed by Individual 1 is impractical.  Donald, nevertheless, called for a national emergency, hoping that it'll giving him a chance to implement the wall/fence/barrier plan.  But Pelosi's presence in Laredo is a rebuke to his whims and lies. 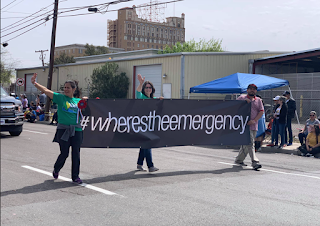 In today's grand parade, members of the Rio Grande International Study Center marched with a banner that read, where's the emergency.  Living in this sleepy town, people don't get the sense that we're in crisis mode, not the way the Liar-in-Chief says.  We're not overrun by criminal immigrants.  We're not constantly watching over our shoulders, afraid that some new Central American arrival is going to jump us.  We just go on about our days dealing with trivial stuff: bills, family, Oscar nominees, etc. 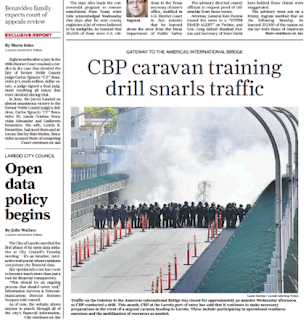 To believe that there is a crisis on the border is to hear it told by alarmists, usually on conservative radio or television.  In the past 20 years, local officials have warned of spillover cartel violence landing in our community.  That has lead to a militarization effort along the Rio Grande.  The build-up has only gotten worse.  Federal law enforcement agencies now prep for some type of doomsday scenario, putting forth a vulgar display of power (borrowed that from Pantera) towards our neighbors to the south.

A lot has changed since the days we used to freely go to Nuevo Laredo.  With the fear that is peddled around today, it's no wonder nobody wants to come to our town anymore.