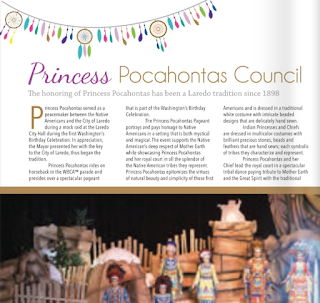 Available for public viewing is the Washington's Birthday Celebration Association's (WBCA) yearly magazine ByGeorge, a publicity handout which includes ads, dates for each and every festivity, and a telling of how the month-long party came to be.

In its current iteration, the journal describes the festival with the usual grandiose and imaginative tone.  One familiar WBCA character, however, has taken on a more central import, that of Princess Pocahontas.  In February of 1898, Nettie Matherne played the part of Pocahontas.  (The name Nettie Matherne doesn't exactly scream native Laredoan.)  The actual "peacemaking princess" called Virginia home in the early 1600s and mingled with the early colonists.  That's the one we all know from historical and animated movie accounts.  She was the daughter of a tribal chief who was never in line to inherit any power among her people.  The title of Princess is an honor that has been bestowed to Pocahontas by us, or rather, the people who push this theatrical event.

In the article pictured above, organizers concede that the beloved WBCA event started in 1898 with a mock raid.  Unfamiliar to most people today is that everything that took place in the initial commemoration was a mockery, cooked up by Laredo's Anglo elite.  Dr. Jerry Thompson, in his book "Laredo: A Pictorial History," tells of a burlesque show being part of that first celebration.  The farcical elements of the Washinton's Birthday celebration are different nowadays.  Instead of a mock battle between made-up players, icons are marched out in bedazzled costumes with no historical accuracy or context whatsoever. 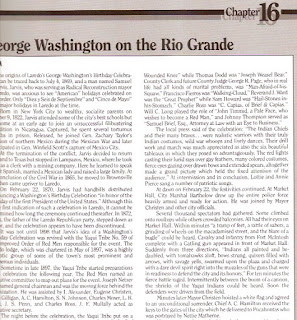 Dr. Thompson details how the WBCA was actually the idea of Samuel M. Jarvis, Mayor of Laredo.

On February 22, 1870, Jarvis had handbills distributed announcing a Washington's Birthday Celebration "in honor of the Birthday of the first President of the Unites States."

The mayor apparently wanted more American holidays celebrated in Laredo.  In 1872, Jarvis relinquished his duties as mayor and his brainchild fizzled away.  Fast forward 25 years and that's when the local Yaqui Tribe took up Jarvis' challenge.  A committee was named to start the ball rolling.  What comes next is nothing short of ridiculous.

In 1897, the Yaqui Tribe No 59 of the Improved Order Of Red Men planned a celebration.  The Red Men created characters to put on a show.  They were:

In the mock battle of 1898, troops from Ft. McIntosh were included to defend City Hall.  Today the only troops that partake in the festivities are Border Patrol agents.  The raid of 1898 had a military prop: a Gatling gun.  Last year, Councilman Charlie San Miguel rode in a Jeep that was rigged with a Browning M2 50 caliber machine gun.

The Red Men of yesteryear drove off the soldiers that were defending the municipal stronghold.  The mayor hoisted a white flag and a key to the city was passed around.  Pocahontas made a cameo.  Nowadays we have an abrazo ceremony between people of Laredo and Nuevo Laredo.  And we have a president who is putting up barbed wire all along our border.  That same dingus (real name Donald) mocks a U.S. senator by calling her Pocahontas.

Laredoans don't know why we celebrate George Washington every February.  Perhaps that's a good thing.  When you look at the inspiration for the festival that we know today, it looks like a bad Mel Brooks movie.  The famed movie-maker did satire.  What our people do is somehow taken seriously, even though the elaborate galas are tacky and misguided.

Professor William Nericcio said of the WBCA: Nothing warped my imagination more as a child than the George Washington's Birthday Celebration.  The GW gala basically freaked me out.  An annual event that mimicked the "glamour" of plantation-style debutantes fused with South Texas sexy culture.  It left this future cultural critic of the border with a lifelong case of frontera schizophrenia.

I've always thought that the WBCA celebration came to be out of a nationalist fervor.  The Improved Order of Red Men gave it some pizzaz, albeit at the expense of Native Americans.  The costumes got more gaudy and the bandas de guerra from Mexico took the place of the original marauding cosplayers, I guess.  Our whole spring festival is absurd, like Max said.  It's Laredo's giant-ball-of-yarn attraction.  It's our Mount Rushmore, without the gravitas.  The only constant in this whole sham has been that Laredo's elite have dictated how history is told.  They drive the narrative and we spectators sit idly by.
Posted by KeyRose at 7:07 PM