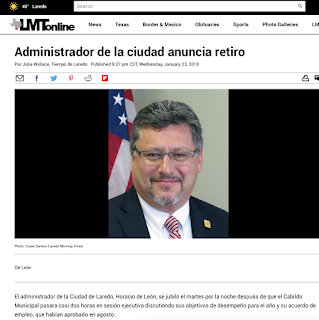 City Manager Horacio DeLeon announced his retirement last night at the first council meeting of the year.  The surprise announcement was made after executive session.

DeLeon took over for Jesus Olivares, who also retired during a council meeting on May 15, 2017.  Olivares stepping down came almost three weeks after city hall was raided by FBI agents in a corruption case that may still be ongoing.  "Chuy" Olivares was named as a target subject in the federal probe.  Nobody from the municipal side of local government has been formally charged yet.

County Commissioner Jaime Canales is set to be sentenced soon in connection with that same investigation.

Carlos Villarreal retired on November 2014.  Of the three city managers we've had in the past five years, DeLeon is the one with the most amiable personality.  Luck to him in his newfound retirement.
Posted by KeyRose at 8:41 PM