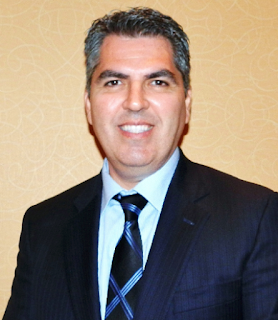 It's the end of the year, a time when no significant news is reported by local media outlets.  For that reason I bring you La Sanbe's 'Person of the Year.'  My selection for 2018 is Jaime Canales.

The former Webb County Commissioner, and sometimes school administrator, pleaded guilty in federal court two months ago.  Canales was found to be taking illegal gifts from an engineering company lobbyist, a man who may be the person who took his own life in late October.  The go-between these two gentlemen was a weasel named Johnny Amaya, a boil of a man who knew his way around our political circles.

An unsealed indictment showed how Jaime Canales was none too shy about asking a corporate shill for money and use of a condominium at a nearby vacation hot spot.  That in exchange for introducing a lucrative road project in to the commissioners court agenda and the subsequent approval thereof.  It's the classic story of lobbyists writing policy for elected officials, compensating those same officials for carrying out their wants, and then securing multi-million dollar contracts to enrich themselves immensely.  Canales played along with the whole scheme, scoring money and trips along with way.

It's unfortunate that this man got lured in to the world of local politics.  You would think that somebody who had a cushy job, that of administrator, would be happy with what he had; but perhaps the boredom was too much to shoulder.  He took hold of something more, a position that brought a little more prestige and attention.  As commissioner he got a comfortable new chair, and a new title that bestowed upon others the obligation to refer to him as the honorable Jaime Canales.  He gained a new workload that brought with it a handsome yearly salary.  He secured the admiration of people like me.  I met Canales before he was elected to office, and then several times by chance during his tenure with the county.  He seemed personable, capable and dedicated to his work.  Unfortunately he became another corrupt cog in the cynical world of Webb County politics.

For his greed, Canales will be sent up for a prison term of about five years.  We'll find out exactly how much time he'll serve when he's sentenced in February.  For now he'll be our Person of the Year.  Soon he'll become inmate number Pendejete who should've known better!

Take care, people.  Hope seems to be in short supply around here.
Posted by KeyRose at 6:47 PM No comments:

A friend mentioned to me the time that Charles Manson was jailed in our fair town.  I found out that he was extradited from our sister city on June 1, 1960.  Manson apparently violated the Mann Act, which makes it a crime to transported women across state lines for immoral purposes.

Interesting tidbit of information if I do say so myself.

(Clipping from the Laredo Times I found online.)
Posted by KeyRose at 1:15 PM No comments:

Mayor Gets Another Turn 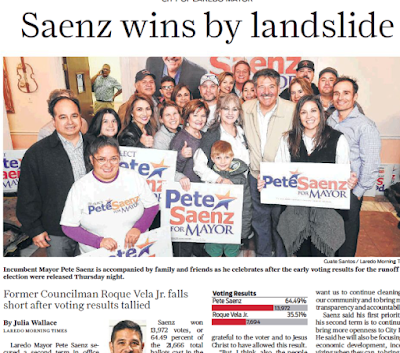 Mayor Pete Saenz was sworn in this afternoon for his 2nd term.  He beat Roque Vela Jr. in a runoff race on Thursday of last week.  As with any election, voter turnout was dismal.  That, however, didn't stop the Times from describing Saenz's win as a landslide.

The mayor received 13,972 votes, out of approximately 131,000 registered voters in Webb County.  Saenz won with about 10 percent of the electorate.  He was "grateful to the voter and to Jesus Christ to have allowed this result." (Julia Wallace - LMT)  The mayor went on to say, the people spoke with their vote, and this is what the community wanted.  End quote.

You have to hand it to the mayor for putting a positive spin on the end result.  He's the face of Laredo; Obviously he has to be as diplomatic as possible.  I'm happy for the mayor, but him invoking Jesus Christ and the Times using language like landslide is a bit much.  You can't make it out to be epic when it's actually unremarkable.

Posted by KeyRose at 6:04 PM No comments: