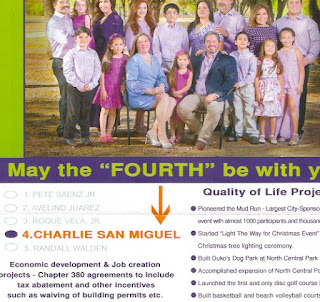 Fliers arrived at the Keyrose household by the several this election season.  One that gets the nod for stupidest cheesiest is Charlie San Miguel's mailer that included the caption: May the "Fourth" be with you.  The stocky candidate for mayor used a play on words, a reference to the movie "Star Wars."

He did so because his name was "FOURTH" on the ballot.  As a council candidate, the move could've been cute.  But as mayoral prospect it comes across as stupid.  Naturally he lost his bid.

We'll soon forget about Charlie San Miguel, as he terms out from city council.  We'll save his flier for posterity (and for an occasional eye roll). 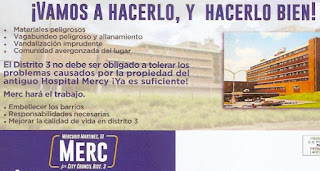 Another flier that was dropped at our doorstep is that of Mercurio Martinez.  He is heading into a runoff in December for City Council Dist. 3.

Martinez calls attention to the longstanding problem of the abandoned building, formerly known as Mercy Hospital, in the Heights neighborhood.  (Sisters of Mercy, please don't @ me.)

Councilman Alex Perez busied himself with smaller, more trivial projects during his 8-year term.  He leaves behind the eyesore that can be viewed from almost any part of the city.  The old hospital was vacated in the fall of 1999.  It's not fair to pin this solely on Alex Perez - the glaring example of inaction - but he SHOULD take credit for his many shortfalls and not just his supposed accomplishments.
Posted by KeyRose at 2:23 PM