The Case Against Jaime Canales

Thursday of last week, October 18, Webb County put out a press release informing residents that Commissioner Jaime Canales was resigning, effective immediately.  County Judge Tijerina thanked the commissioner for his years of service and wished him well.  Cindy Liendo was appointed that same day by the county dad.  (Liendo won the March primary for the Precinct 4 seat.)

Hours after Tijerina's press release, we learned that Jaime Canales and Johnny Amaya had pled guilty to bribery charges in a Houston court.  The speculation was put to rest.  Canales' sudden resignation had a reason. 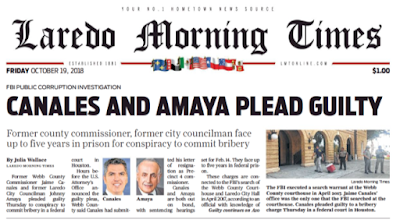 The FBI raided city hall and Mr. Canales' office in April of last year.  Current and former government officials were named as target subjects.  Commissioner Canales turned out to be the first casualty of the feds' investigation.

The County Judge put out another statement on Friday. 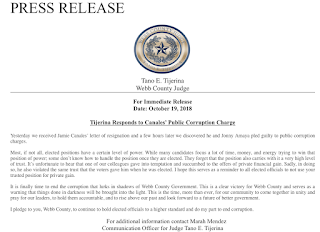 Save for the horrible grammar in the second presser, Judge Tijerina took issue with Canales' corrupt leanings.

The Saturday edition of the Laredo Times gave us more details on the scheme that was hatched by Canales, Amaya and an unnamed corporation.  We have yet to hear of any more indictments, arrests or plea deals.  The FBI's case from a year ago involved more than one county knucklehead.  For now we wait. 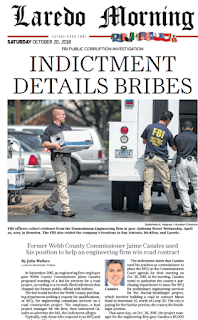 Posted by KeyRose at 7:32 PM No comments: