Vote No On Laredo Convention Center

One of the proponents of a new convention center has been Councilman Roberto Balli.  His district includes the downtown area, so naturally he would be pushing for the new facility.  He was quoted in the Times as such:

Every time somebody (Balli) has brought up the construction of a convention center, I've imagined that a large space, with meeting rooms, was needed for actual conventions.  I thought Laredo needed a facility to host events that couldn't be had at the arena; again, actual conventions that would bring in visitors.  But the group pushing for the convention/conference center - Balli, La Posada, Fasken Oil & Ranch, Ltd, Chamber of Commerce, IBC Bank, etc. - is now trying to convince the Laredo public that it'll be a venue to serve us. 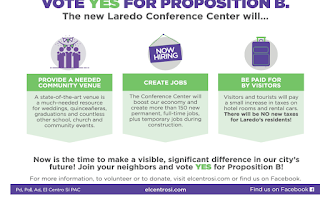 (another clipping, from today's LMT.)

The CONFERENCE center will be a great site to host weddings, quinces, graduations and so on, so says the new Centro Si advertisement.

Venues for those kinds of events already exist.  To host quinceaneras shouldn't be a selling point for building a convention center.  The arena, baseball field and golf course have been under-utilized, hardly used for their intended purposes.  Now our leaders are trying to sell us on the idea of a convention center; but they're telling us that the facility's calendar year will be made up of small events, supported by actual Laredoans.  Already they're revealing in their latest pitch that big conventions will be few and far between.

The convention center may be useful for the people of Laredo in terms of low-paying jobs, but it shouldn't be a site to host receptions that will benefit La Posada and other City of Laredo insiders.

UPDATE: 11/23/18   Something that Richard Raymond promised once.