City council added a supplemental agenda item for tomorrow's meeting, where officials will have the opportunity to approve the contract for the firefighters, ostensibly.  Because of the item, firefighters may see salary increases for the next four years, among other things.

I looked into the city's budget to try to make sense of it all, since people have been bickering over dollar amounts and the need to reward our first responders.  (The following slides are from the City of Laredo website.)

The Laredo Fire Dept. is made up of almost 400 firefighters.  (colored highlights are mine.)

The fire department is composed of 14 stations.

For this fiscal year, that is on its tail end, firemen got $1.5 million in pay/benefit increases.  At tomorrow's meeting, they stand to get more for the coming year.

Here's a breakdown of the expenditures the city needs to cover for the fire department.  It includes more than $1.1 million to cover contract obligations. 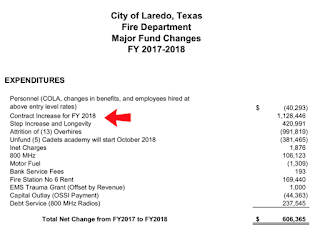 Tax money that has gone towards the fire department has increased year after year. 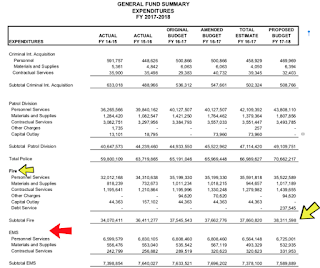 The city listed, in their budget, the ambulance service fees that were collected for one year: $4,671,980.  That comes from billing residents every time EMS units and fire units respond to an emergency.  We the public get a bill.

Right now city staff, Mayor Pete Saenz and union president David Gonzalez are all presenting different figures and reasons for delaying or approving the salary increases.  I don't know that CONSTANT salary increases for police and firefighters are sustainable over the long run.  The appraisal district can only justify hiking property valuations for so long, enabling the city to collect more tax revenue.  Transfers from bridge toll fee collections can only do so much, and is not necessarily there to benefit those who can unionize locally.  And if the city is $1 billion in debt, we should really take our time to approve any potential budgetary constraints.

And because council members accept donations from the firefighters union, the thought of rushing through a contract with benefits that so few in Laredo are able to take advantage of, but comes at the expense of the greater community, then city council should delay the decision as long as it takes.