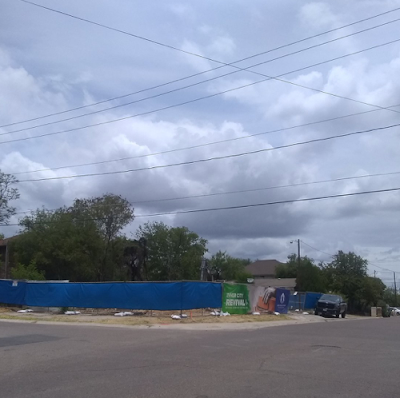 On the corner of Tilden and Price Street, there used to stand a dive bar by the name of Bernal's Place. It was a wood frame house that was converted into a watering hole, it seemed.  It had not been in business for a while.  It's completely gone now, making way for some type of affordable housing.

I thought I had an old photo of the place, but I'm having trouble finding it.  For reference, here's a shot from Google Maps. 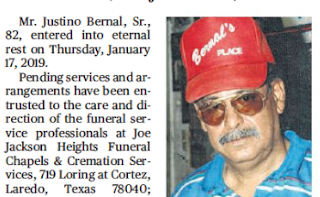 Mr. Justino Bernal passed away last month.  His obituary explained how he took over Bernal's Place, the neighborhood bar pictured above, from his father.  The ramshackle establishment had been closed  for several years; And in the fall of 2018 it was actually demolished to make room for affordable housing.
I never went into Bernal's Place but its memory will remain as one of LaSanbe's dive bars.

Posted by KeyRose at 2:58 PM No comments:

In 2014, when a wave of immigrants from Central America were coming to this country, the federal government was having trouble handling the overflow.  A lot of unaccompanied minors were part of the large influx of people.  Detention centers in south Texas were crowded.  The problem seemed untenable.  Henry Cuellar said this about the Obama administration: 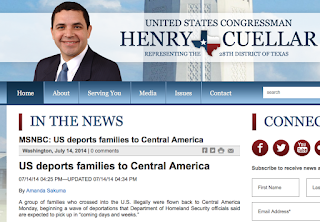 The way I remember it from 2014, our local leaders didn't want to lift a finger to help the incoming immigrants.  And Henry Cuellar's only concern was how to deport these people back as soon as possible. 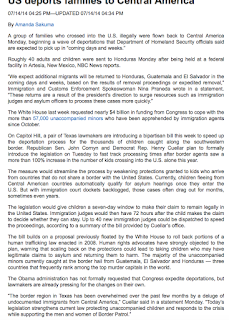 Immigrants are still coming to the United States, but team Trump is doing something severely egregious:  he's separating the children from their parents.  As I type this, MSNBC is reporting that the "Trumps administration is housing hundreds of babies and toddlers in at least 3 facilities in south Texas."

Far from showing any sign of outrage now, Henry Cuellar is instead smugly pointing to how he showed us proof of this back in 2014. 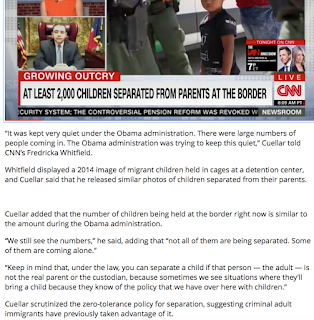 Cuellar has the gall to downplay the current humanitarian crisis and not challenge the evil actions of  Donald Trump and his minions.
Posted by KeyRose at 7:42 PM No comments: 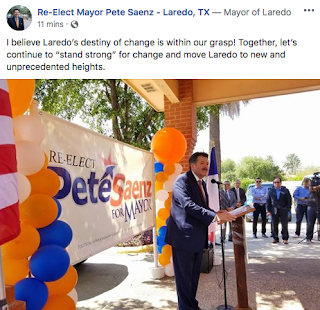 Tuesday, the day after Memorial Day, signaled the start of the races for the upcoming elections in November.  Mayor Pete Saenz held a press conference, with crooked mustache and all, to announce his re-election bid.  Not to be outdone, greasy-haired challenger Charlie San Miguel is doing things a little more adventurous. 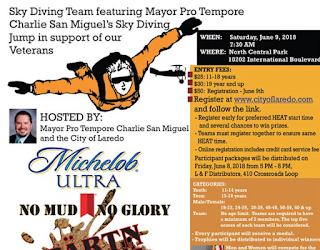 San Miguel is again hosting his Meh*Run at North Central Park, but he's apparently sky diving into the event, all while having a boner for military veterans.  This guy, or the mayor for that matter, looks like he can't do much in regards to physical activity, so he'll fall from the sky instead.

Charlie will be vacating his District 6 seat in the fall.  Word on the street is that there may be up to 12 candidates vying for his chair.  One will definitely have to do something wild to separate him/herself from the pack.  La Sanbe does not recommend sky diving.
Posted by KeyRose at 12:33 PM No comments: