Typical tweet from a typical politician after another school shooting, this time in Texas.

Posted by KeyRose at 6:41 PM No comments: 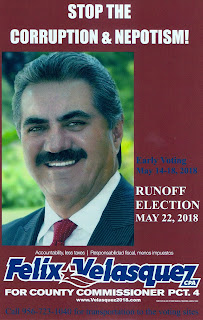 At least one runoff candidate has dropped by the Keyrose compound to remind us of the looming election, later this month.  His message straight and up front: Stop the corruption and nepotism.  Exclamation point.

Over the weekend, approximately 900 voters approved the LISD bond measure, which will allow improvements to existing schools and enable the district to build a new Cigarroa Middle School campus.  Ya veremos.

And the field is getting crowded for the spots that will open up at city hall this fall.  People are already starting to file their paperwork for-to get a chance at Charlie San Miguel's, and Alex Perez's (a La Sanbe favorite) seat.  Let's not forget that a certain FB celebrity is vying for the mayor's office.

Posted by KeyRose at 7:54 AM No comments: