Four years ago, then-Council Member Cindy Liendo stepped down to run for mayor. She had represented District 8 for six years. She was unsuccessful in her bid. In 2016, Esteban Rangel stepped down as council member to run for county commissioner against Jesse Gonzalez. Rangel unfortunately lost his bid too. When I asked if Council Member Alex Perez would step down last month to run for county commissioner, I was met with bewilderment, as if I had asked something that was totally unheard of.

Perez never hinted at the possibility of giving up his council seat to seek a different office. Given the current problem he’s facing, perhaps his withdrawal from city hall in March would’ve been the most prudent. An ominous cloud, a moral turpitude shadow, if you will, will hover over Perez until his second term ends later this year: He now faces an ethics probe, courtesy of city council, and a possible civil suit from a local businessman.

Alex Perez is being accused of orchestrating a heavy-handed inspection of a business on Clark Blvd. The proprietor of that establishment alleges that this was the result from him refusing to put up Perez’s campaign signs. Perez apparently saw red when the businessman didn’t comply with his wishes. The gentleman at the receiving end of Perez’s unpleasantness filed a complaint with police; A shrewd move on his part. The business owner was cited for a couple of minor infractions. He, however, categorized the occurrence as a raid and as retaliation by Mr. Perez for not offering his political support.

It was discovered at last night’s council meeting that Council Member Alex Perez directed the Executive Director of Public Services to investigate the conditions at the business on Clark. It was previously mentioned that the inspection was hastened by an anonymous call. All signs point to an abuse of power on Perez’s part. The timing of the incidents, the fact that the business is not even located in Perez’s district, and his absence from council meetings all suggest a, oh...how you say, clusterfuk.

Mr. Perez was not present during council proceedings yesterday. Big surprise. He can’t hide forever. Unless he resigns, this problem will plague him until he terms out.

Political pettiness aside, Perez’s command to Mr. Executive Director of Public Services doesn’t fall into uncharted waters. Council Member Charlie San Miguel was chastised by former City Manager Carlos Villarreal for taking mud run proceeds home. He apparently interfered with city administrators the day of the race. When Jorge Vera was busted for alleged drug use at a local bar, he tried to get out of his predicament that night by contacting and urging a police supervisor to look into his matter. Again, interfering with administration. Vera’s wasn’t so lucky in the end. He was recalled from office.

And now we have Perez, an impulsive bully who apparently has no political acumen after being on council for more than 7 years. It appears he doesn’t know, or doesn’t care that a council member is supposed to run things by the city manager’s office if he/she wants anything done. You don’t take matters into your own hands, especially in the reckless manner that he did. He led the raid on a local business and now he’s facing the consequences, sort of.

City council has opted to send the problem to the ethics commission. I didn’t know we still had one. They are as predictable and impotent as ever. But perhaps it’s for the better. If they chose to judge one of their own, and possibly oust the motherfucker, it would tear apart the already-divided council even more. It’s best, I guess, to let Perez sink into the hole he’s dug for himself.
Posted by KeyRose at 9:45 AM No comments:

Holloways Bakery closed up shop last summer.  The building is now being gutted. 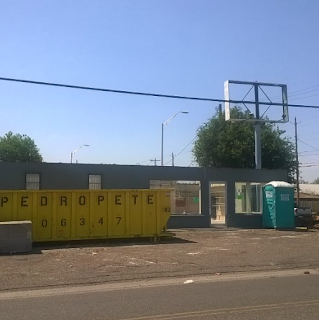 The Taj Majal That Canseco Built


City Council approved a non-profit organization that will implement the food policy and urban agriculture in the City of Laredo.
The Canseco House will serve as the base where the organization will run its operations.
Posted by KeyRose at 12:06 PM No comments: