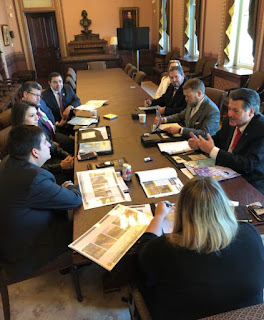 I did not vote in Tuesday's primary election.  I was very clear about it on social media.

My absence from the polls was inevitable.  It was only this month that I followed through with my self-imposed ban from voting.  It comes from years of disillusionment with Laredo's political figures.  It comes from shared stories of acts of pettiness on the part of council persons and commissioners.  It comes from the defensive tone that pols take when they're challenged.  And it comes from countless reports of undeserving city and county leaders who do things that are less than honorable.

When you look at the photo above, you notice that there has been a turnover of elected officials.  We can thank term limits for that, perhaps.  Nelly Vielma, George Altgelt and Pete Saenz are seen meeting with federals staffers in Washington, D.C.  The three have settled in nicely to their first term as city representatives.  In the background, to the right, you see Charlie San Miguel and a lady who is strategically positioned behind him.  Through a trusted source, I found out that the lady is his wife.

You have a family member sitting in on official city business inside the White House.  You have a spouse who is taking advantage of fancy lodging in our nation's capital, courtesy of the Laredo taxpayer.  I find this utterly unacceptable.

What's worse is that Vielma, Altgelt and Saenz tacitly approve of San Miguel's actions while away from Laredo.  We have politicians not looking out for our best interests and others looking the other way.

It's a futile battle when the electorate has to go up against the so-called political machines, the uninformed citizenry that blindly casts votes and the vote harvesters who wrangle people's support in return for some type of gain.  Add to all of that the willingness of those who seem honest to go along with the worst of Laredo and Webb Co.

If the well-meaning officials are there to prop up the bad ones, then what effect can my measly vote actually have. 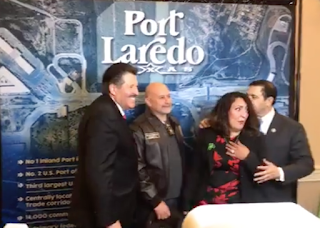