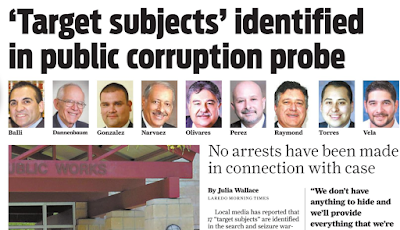 It's almost ten months since FBI agents went all up local government's ass.  It happened on a clear day in April of last year - the 26th, to be exact.  I recall tweeting up a storm that day, and looking out for media updates in the days following.

The only story I posted on this blog was a local lawyer's take on what transpired and what we should expect. 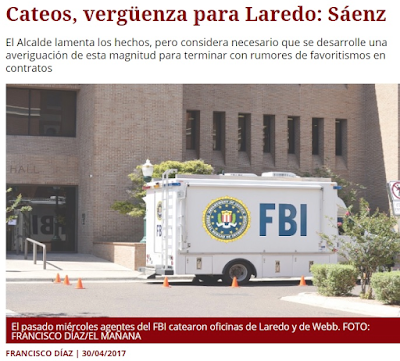 It would be nice to know who is going to go to jail.  But for now, all I can do is look at the personnel changes that have taken effect in local government and wonder if they have something to do with the ongoing FBI investigation.

In October, Commissioner Jaime Canales announced his campaign for re-election.  Canales' office was one of many that was raided last spring.  Then last month he suspended his campaign, citing health issues and the future of his career.  The timing of his move is all too peculiar.  Is the hammer about to fall?  And what about his brother, Roel Canales, and his short stint as County Court at Law Associate Judge?  Connection?

Among the supposed 'target subjects' of the FBI, Jesus Olivares is no longer the city manager.  The City of Laredo also has a new city attorney.

Who is talking to the FBI?  And who is mounting their legal defense?  The waiting game continues.

Thanks for reading.
Posted by KeyRose at 3:36 PM No comments: 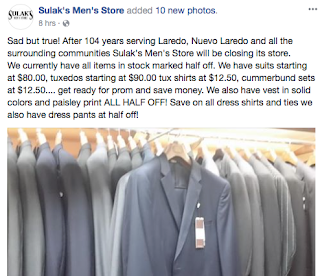 Sulak's announced last week on their Facebook page that they're closing up shop.  I wasn't a regular patron of this downtown institution.  I did buy a suit there a couple of years ago as a Father's Day present to myself. 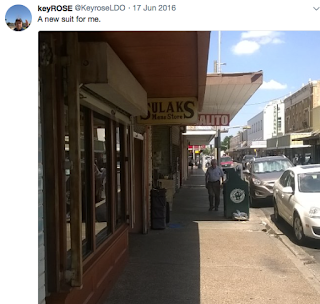 Yet another nail in the coffin for downtown.  So long, Sulak's.
Posted by KeyRose at 8:34 AM 1 comment: