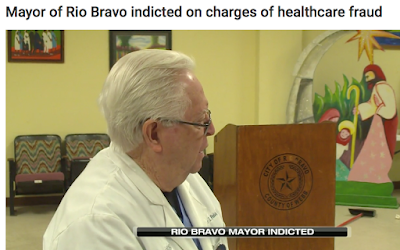 Dr. Francisco Pena, longtime Laredo physician and Chief of Staff at Laredo Medical Center, was indicted on January 10 on charges of money laundering, healthcare fraud, making false statements to the FBI and obstruction of an investigation.

Word on the street was that Dr. Pena developed chest pain when he was about to be taken into custody.  He was evaluated by medical staff at LMC, but ultimately cleared for authorities to haul him in.  He was wheeled out, wearing a gown and possibly the look of shame on his face.

The good doctor attended a meeting at the Rio Bravo City Hall last weekend.  It was thought that his removal or exit from office as mayor of Rio Bravo would be acted upon.  Alas, Pena made no effort to vacate the seat and the item is in limbo for the time being.

His attorney, Keko Martinez, spoke to the media.  He said that the doctor's alleged crimes have nothing to do with his duties as mayor.  Thus he sees no reason why Pena should step down as an elected official of Rio Bravo.
Posted by KeyRose at 5:13 PM