Some Voters Spoke Loud And Clear

Last week the voters of Webb County said NO! to a bond proposal that would fund a new jail and training center. 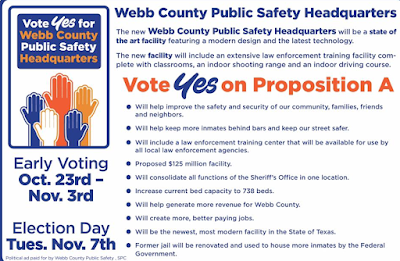 The Mad Dash To Finish

The Laredo Times featured a story on the Canseco house on October 8, 2017.  I'm just now getting around to jotting down some excerpts from the writeup for future reference.  Story is entitled FINISHING WHAT WAS STARTED: City takes on restoration of 1925 French chateau.

Here are some passages from the article:

Over 2015 and 2016, Perez allocated a total of $782,595 of his district priority funds to pay for the home's renovation.  More than $100,000 has already been spent to address its most urgent needs: the leaky roof, the asbestos and the lead-based paint, Eads said.

But this is just the tip of the iceberg.  This is a three-story building, totaling about 3,500-4,000 square feet, Eads said.  There is no heating, ventilation or air conditioning, basic electricity or plumbing.  There's no plumbing for sewer systems, as an example.  They had outhouses, Eads said.

In order to keep costs down, the city will have to act as the general contractor for the building, and bid out by individual trade: HVAC, electrical, plumbing, painting, etc.

We're going to have to beg, borrow, steal - do what we can, and come together as a community, as a whole, and kind of pitch in, Eads said.

The plan is not to restore the home to its original state, but to renovate and preserve it.  The city cannot afford to replicate windows to be historically accurate, for instance.  Plus that would turn the Canseco house into more of a museum.  They want people to actually use the facility without fear of approaching it, Eads said.

Perez's primary objective in purchasing the home was saving the structure.  Its eventual purpose was secondary to him, according to Eads.

The main focus of the project has been the restoration of this near 100 year old diamond in the rough.  Its use or intended use has always taken a back seat, Perez said in a text message to LMT.

Berman Rivera, who is leading the city's new horticulture division under Parks and Leisure Services Department, is tackling the Canseco house's community garden.

This will not be structured like a community garden where people tend to their own personal plots, Rivera said.  They are working on establishing it like a community-supported agriculture farm, where people pay for seasonal memberships, he said.  It's yet to be fully ironed out.

Eads noted that Perez has a mad dash to finish - 18 months before his final term in City Council comes to an end.  The project will not stay incomplete by the time he leaves, Eads said.

Posted by KeyRose at 8:31 AM No comments: