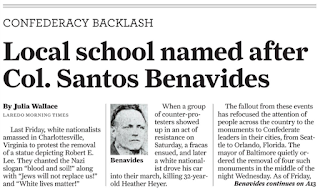 While the rest of the country is taking action to remove Confederate statues from public squares, Laredo carries on with its complacency of its own troubled history during the Civil War.

Julia Wallace (LMT) noted in Sunday's paper the reaction from local leaders to Santos Benavides, a colonel in the Confederate Army.

The Benavides family, like most families in Texas, had no inclination toward abolition.  Yet there was no evidence they ever aspired to own slaves.

Thompson wrote "Tejano Tiger," a book about Benavides, warts and all, apparently.  More on the colonel:

And Benavides had been a slave-catcher in instances before the war.  He once gathered 10 armed men to cross into Nuevo Laredo with him to capture a runaway slave and bring him back across the river, where he was put in jail.

Others in town, however, aren't so quick to throw shade on the infamous Santos Benavides.  UISD Superintendent Roberto Santos, speaking on the school in his district, 'said he would not consider changing the name of Col. Santos Benavides Elementary School.  If the UISD school was named after an outsider, that would be a different situation.'

State Sen. Judith Zaffirini was quoted as saying, he is not known as a Confederate figure.  He is seen as a local leader and a local hero.

Rep. Henry Cuellar weighed in with a sallow statement, coinciding with his own pallid countenance.  I'll leave it at that.

But the cake-taker has to be our own Mayor Pete Saenz, a man who has exhibited having no backbone since taking office.  The mayor:

Given our composite, we're primarily Hispanics.  Some people may not necessarily care.  Why create an issue when we're OK with it?

The mayor didn't seem to mind the displaying of Civil War relics when discussing the Confederate flag two years ago.  His cowardly attitude endures to this day.  He's the perfect man for our sleepy hamlet.  Not a good thing.

Look around when you have a chance and you'll see the Confederate flag on display throughout Laredo.  Our leaders should care about the image we're putting forward for visitors.  It matters. 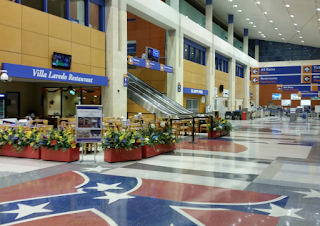 The Confederate flag comes in many forms. 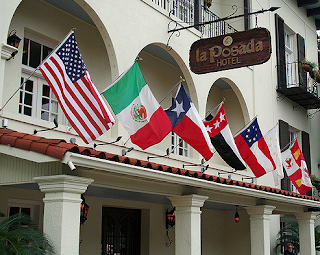 If you happen to watch a city council meeting, look for the flag.  It's not hard to miss.

UPDATE on January 2, 2019.  Found this old photo online.  I noticed how this town used to fly the Confederate flag that's more familiar to people.  Over the years, apparently, businesses have softened its take on local history.  It's less jarring and controversial not having the Stars and Bars flying high out in public, especially at a spot that is one of Laredo's marketed destinations. 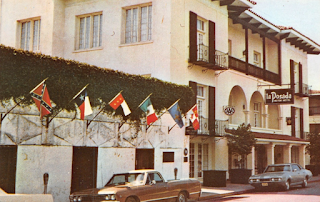