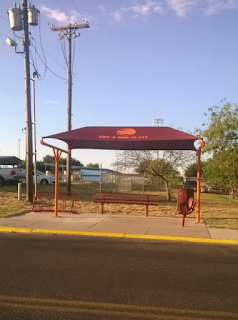 A nice canopy, benches, and bike rack were the featured items during a press conference held by Councilman Rodriguez on Thursday.  It's called a Bike & Ride Plaza, and it's supposed to encourage citizens to ride their bike and use the El Metro bus when going on about their business.

The nifty bus stop is located on Zacatecas, near the fire station and recreation center.  (Cigarroa HS is within walking distance.) 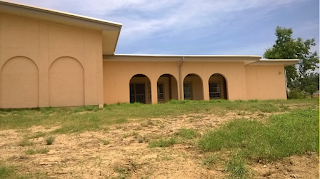 The building that used to house the former Santo Nino branch library is across the street from the Bike & Ride Plaza.  It was renovated last year.  The district's councilman said, during Thursday's presser, that the facility would be used as a WIC clinic.  For now it sits empty.

And that's south Laredo for you.
Posted by KeyRose at 8:32 PM