Too Much Uncertainty And Anxiety

City council had a meeting on April 17, 2017, where they discussed the future of the vacant/abandoned Mercy Hospital in the Heights area.  Councilman Alex Perez does not want the old building to be used as a detention center by the federal government.  I can understand the neighborhood's residents not wanting a detention facility in their backyard.  The Heights is a mix of residential and business establishments.  But a public eyesore with trespassers who do god-knows-what is okay?

The Carranco family, who owns the old building, has said that they've had offers in the past, but nothing has panned out. 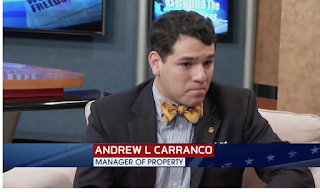 (photo courtesy of KGNS: Beyond the Headlines)

Alex Perez has floated the idea about the city buying the former hospital.  I believe he wants to do that so the City of Laredo has more control over what is developed at the site.  The Carrancos, for their part, can just sell the property and its new owners can turn the place into a bingo hall or a flea market.  But if the city buys it, they can possibly lease it out, and perhaps rake in some revenue; or they can just flatten the structure and install a park.  That would be ideal for Alex Perez, y quedaba bien con sus Heights constituents.

But before the city can entertain the notion of buying Mercy, they have to crunch the numbers, with the help of the federal government.  Councilman Alex Perez:

What the EPA is going to do is, uh, provide us exact numbers as to what's wrong with it, uuhhh, how much is it gonna cost to clean, and uuhh, they're going to provide us a roadmap as to...(pause).. uh I guess you can say, the best roadmap, uh, the best way to go.  (end quote)


Councilman Perez has his own anxiety roadmap, if you will, for the abandoned building.  But he's been through this before.  In the spring of 2011 he even reassured the public that the city would not take ownership of the building.

Perez has about a couple of years left in his second term.  The clock is ticking and it's still hard to tell what will happen with the public nuisance that has sat empty in Las Lomas since 1999. 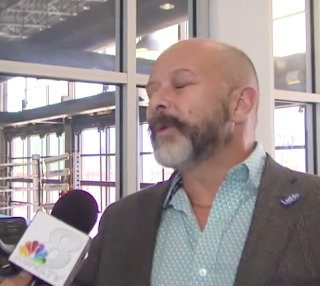 (another courtesy photo, albeit unflattering for one person)
Posted by KeyRose at 9:27 AM