Will It Spill Over?

This would be a secular prayer, she said, not catering to any particular religion.  Vielma said this idea was inspired by City Council's recent trips to Washington, D.C. and Austin, where meetings typically begin with an invocation.


Ms. Vielma was sworn in as council member in late December 2016.  Three months in and she proposes starting city council meetings with a prayer.  Charlie San Migeul, who sits next to Nelly Vielma, was almost a year into his first term when he suggested prayer before meetings.  That was in 2011.  San Miguel mentioned, as Ms. Vielma is doing now, that prayer was used at the state capitol.

Then-Mayor Raul Salinas approved of praying at city hall, but deferred to the legal department to acknowledge the limitations of doing so.  The practice was started at one point, but it proved to be more of a distraction for city council.  Some people didn't want to take part in it, and at least one person who led the invocation was met with disdain.

Some people came out in support of prayer, and some did not.

At Monday's meeting it was agreed by council to start meetings with a moment of silence.  I'll see if Ms. Vielma's item spills over into the editorial pages of the Times, like it did six years ago. 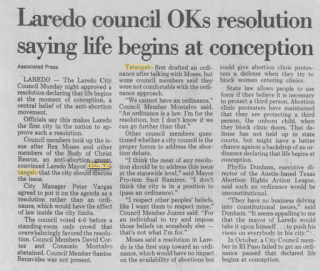 Mayor Aldo Tatangelo and city council once approved a resolution stating that life begins at conception.  I found the clipping at the public library's microfilm files.