Logistics Are A Bitch 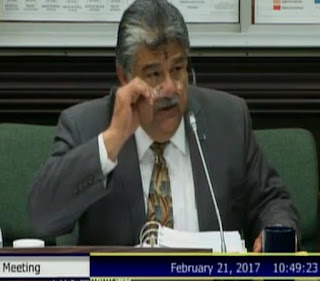 The city manager asked council to consider scrapping the finance, and operations committees because they've had a hard time convening a quorum.  From last week's meeting, and I quote:

The Finance, and Operations Committee meetings, we've not been able to make.  We've had a lot of cancellations.  We see that there's been a change in the council; everybody's busy working.  Possibly this is not a viable route anymore, like it was before.  Staff is having to produce agendas, two, three times, every time we meet.  Then we don't have a quorum, so staff has to come to city hall, back and forth.  My recommendation, if council is willing, is to possibly implement a consent agenda that all of you are familiar with.

City Manager Jesus Olivares highlighted Charlie San Miguel's business obligations that take him out of town.  CSM is absent a lot from committee, apparently.  To avoid their brain trust responsibilities, Mr. City Manager thinks it's best to just do away with the committees and their dumb meetings.

Let's take a look at the composition of the finance and operations boards. 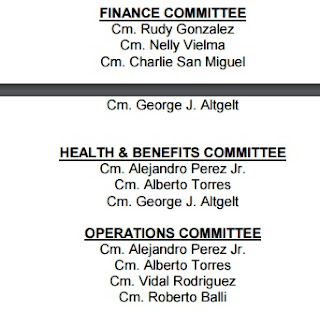 Nelly Vielma made a comment after the city manager spoke, but her words were inaudible.  The councilwoman's mic may have been off.  Councilman Torres also made a comment, but all I heard in their exchange was Mr. Olivares saying, yes, other cities do it.  And that seems to be the depth with which any subject is handled at city hall, how other cities handle their business so we can follow their lead.

It's probably a good idea that we do away with the committees.  I mean, it seems like the foxes are minding the hen house, so to speak.  So really, what's the use?  And from what I've seen and heard recently, each committee has resulted in the formation of cliques.  The Operations Committee's band of brothers seem to have each other's back when things get tense at council meetings.

When it comes to the city's finances and its operations, I figure it's a good thing to hash things out a few times, maybe even have fresh, independent eyes go over things in order to legitimize them.  Alas, I'm just a bystander and city hall would likely not like me going over their financials.  They're the elected ones and they know best.
Posted by KeyRose at 3:37 PM