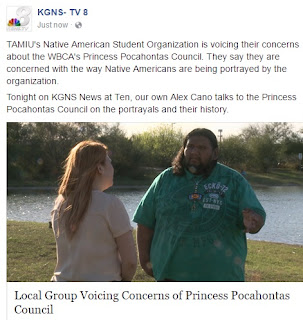 KGNS interviewed a local member of the Kickapoo tribe, Santos Polendo.  He founded the Native American Student Association at TAMIU.  Polendo takes issue with the authenticity of Laredo's Pocahontas celebration and its organizers.

The Princess Pocahontas Council responded with a written statement. (excerpts)

As a symbol of natural beauty and simplicity, Pocahontas epitomizes the virtues of those first Americans.  Dressed in traditional costume and accompanied by her court of Indian Princesses, Pocahontas is presented with the key to the city and rides on horseback in the parade.

The group which formed in October 1980, gathered initially as a result of Ms. Velia Uribe's interest in the role which Pocahontas played in the annual celebration.


The group said that they've never had any issues up until now.  I think there's a reason for that and it has to do with our community's complacency.  Nobody questions why we do the things we do, and the public is clueless as to how the whole WBCA event started.  Why do we celebrate George Washington?  Quien sabe!  What's the significance of Pocahontas in the parade?  Sepa la bola!

The whole reasoning for the WBCA's cosplay events is that that's how it's always been done.

Apparently it's okay with the natives - the Mexican-Americans, I mean - to promote distorted images of historical figures, spend outrageous amounts of money doing so, participate in a parade where they are followed by the local Border Patrol outfit, and then not question any of it.

I applaud Mr. Olendo for speaking out.  There is a lot to be said for cultural authenticity, both for his tribe and for ours.  It's okay to absorb the rituals of this great country, but we can't totally shed ours and become something that we're not.
Posted by KeyRose at 11:25 AM