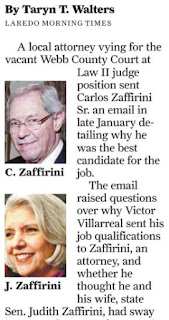 Last month, the Laredo Times raised the question of why a local attorney was pimping himself out to local officials, and to a private legal professional who happens to be married to Senator Judith Zaffirini.  The unknown attorney and the Zaffirinis dismissed any and all concerns about the communication, saying that it's normal procedure for a candidate to introduce him/herself to the world when a selection process is about to take place.  A coveted seat needed to be filled and any mention of impropriety was to be brushed aside.

The Webb County Court at Law II had a vacancy.  Judge Jesus Garza resigned in January, and is currently facing an indictment of soliciting a loan.

Enter Victor Villarreal, the person who nobody has ever heard of before, but apparently had the Zaffirinis on speed dial, so to speak.  Everyone will know the name Victor Villarreal now, for he's been chosen by the all-wise Commissioners Court to lead the County Court at Law II.  He will restore order to Jesus Garza's beleaguered court and all will be good in the world.  But, in what should've been an appointment devoid of any political influence, and an office regaining its integrity, instead has turned into a mockery of the local judicial system.

Hell, what am I saying?  This is Webb County.  It wouldn't be Webb Co. if it all wasn't a sham.

The Zaffirini's meddling in this matter is a joke.  Judith Zaffirini acknowledged that it was the Commissioners Court's ultimate responsibility to select a person to succeed Jesus Garza; But she saw it fit to influence the court's decision by making a case against the former judge.  Our state senator chimed in with what she thought was best for the Court at Law II, all while her husband had business with that same court.  Carlos Z. would stand to benefit in that court with the help of Judith Z.'s influence.

But there's no conflict here, right?  Judith Zaffirini just happens to have buildings named after her in Webb County, but her influence is tempered.  Victor Villarreal emailed Mr. Zaffirini with his qualifications in January.  No biggie.  But in today's Times, Judith Zaffirini was quoted  as saying that she's known Villarreal since he was a law student at the University of Texas.  There is no appearance of questionable behavior here; everyone is beyond reproach.  They are all so far separated from the interests of the Court at Law II.  Except that they aren't.

The Commissioners Court selected Mr. Villarreal yesterday.  I could say that they had no knowledge of the relationship between the Zaffirinis and Villarreal, and of Mr. Zaffirini's matters before the Court at Law II.  But we won't know because, as Julia Wallace (LMT) wrote, the commissioners and the county judge selected Victor Villarreal "unanimously and without public discussion."  County Judge Tijerina said that "Everything was taken into consideration."  But will we ever know?

From my point of view, this all sounds like the old lament: it's not who you are, it's who you know.

People get ahead in this town by the company they keep.  They'll smile and wave to the cameras.  When we're not looking, the favors that were granted to them will have to be returned, and none of us will be none the wiser.