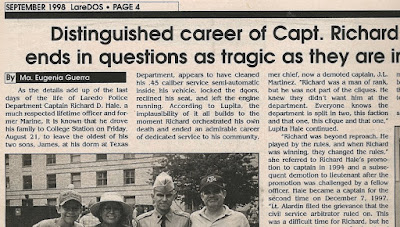 It's been more than 18 years since the passing of Cpt. Richard Hale. On the morning of August 24, 1998 he was pronounced dead outside of the gun range on Hwy 59.  Authorities explained that he "had a single gunshot wound to the chest."  (see article below)

Hale was a devoted family man, and a dedicated veteran of the Laredo Police Dept.  Meg Guerra's writing in the September 1998 issue of LareDOS doesn't hint at any reason that would lead Cpt. Hale to take his own life.  The occurrence left everyone around him baffled.

On September 7, 2011, Constable Tino Juarez passed away.  It was determined that he died of a self-inflicted gunshot wound to the chest.  He was at home when he turned the gun on himself.

Last week, another local officer took his own life, the circumstances matching that of Hale and Juarez: a lethal bullet wound to the chest.  Lt. David Medina, an officer with LISD, was found unresponsive at the law enforcement gun range Tuesday afternoon.  An investigation is ongoing, but officials do not suspect foul play at this point.

News like this is so traumatic.  I can't imagine what the families go through when something like this happens.  From my point of view, these men were confronted with, what seemed to be, some insurmountable crisis.  Their answer to the pain was a quick, yet brutal solution.

These three individuals, who dedicated their lives to public service, now share an unfortunate distinction.  Their loved ones will hopefully one day find peace.
Posted by KeyRose at 3:54 PM No comments: 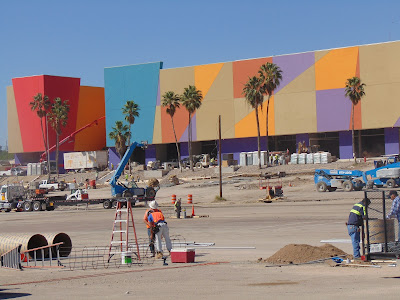 I took some photos of the work being done at the outlet mall to be opened on March 16. 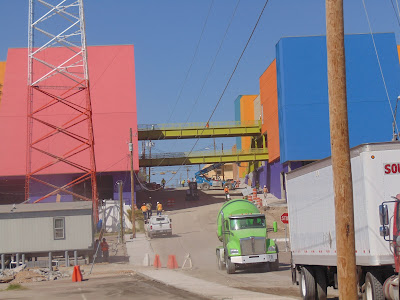 Media will be given a tour of the facilities next week. 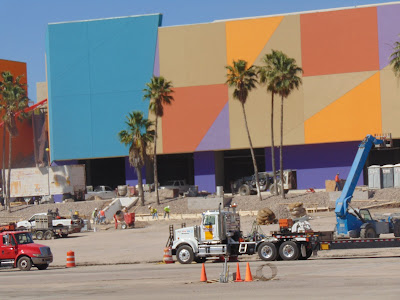 The people who construct places like these are never recognized.  We always point to the times when things are open to the public or when they close, but never to the moments when people are actually putting down the last brick, or doing the menial tasks.
Posted by KeyRose at 1:40 PM 1 comment:

January 12, 2017 Judge Garza arrested for the indictment: soliciting a loan.

January 22, 2017 Judith Zaffirini is quoted in the LMT, jabbing Garza's court - 'the absolute worst in the state.'

February 19, 2017 Laredo Times reports that local attorney, Victor Villarreal, sent Carlos Zaffirini an email containing the reason why he should selected to fill vacancy at Court at Law II. 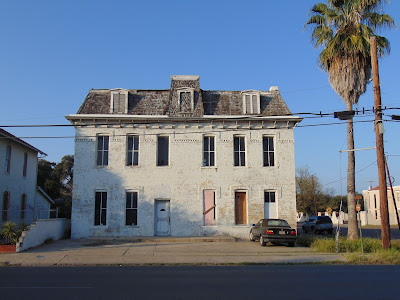 This house is located on the corner of Victoria and Davis Ave.  It's been vacant for as long as I can remember.  Pretty soon, it seems, it will meet the same fate as the Webb County Courthouse Annex: demolition by neglect.

I don't expect this unique estate to be restored, and I'm definitely not suggesting that any local governing entity should take ownership of it.  All I can do is archive the Laredo that I know at the present time, and take note of how some properties don't stand a chance, whether that's through necessity or a lack of will.

There used to be an old church right across the street from it.  I recall it standing, also abandoned, in the early 1990s.  All that is left now is an empty lot. 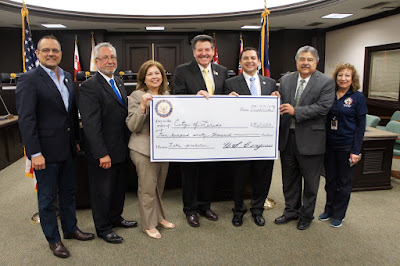 Information courtesy of the City of Laredo.

This moment is the culmination of the endless work that the mayor, city manager, staff, and council put in.  Their constant travels to D.C. net useful resources.  At least that's what they tell us.

The Health Department getting money to combat Zika is great.  But you can't tell me that all those people in the photo (and everybody that travels to D.C. every spring) had a hand in getting such grant money.  A more realistic photo, I would assume, would only include Dr. Gonzalez, Director of the Health Dept., Congressman Cuellar, and perhaps Ms. Julia Perales.  They're probably the only ones who worked to get this money.

And you know what?  They probably didn't even have to make the trip to Washington to garner this money.

Nevertheless, here's how Henry Cuellar tells it in his press release on Friday.

“I fought for these federal funds, along with the City of Laredo, so our community can invest in proven prevention methods,” said Rep. Henry Cuellar. “Zika virus infections have been reported here in our border communities, so vigilance is more important than ever. Now, our local officials have the resources they need to protect Laredo and  families. I thank the Centers for Disease Control and Prevention and Dr. John Hellerstedt, Commissioner of the Texas Department of State Health Services, for their help in securing these funds.”

“When Federal, state and local authorities work together, we get results.  This announcement today is evidence that Congressman Henry Cuellar is working hard for Laredo to get federal reinvestment dollars channeled into our city,” said Mayor Saenz.  “And when Laredo goes to make its story known in Austin and Washington, D.C., there are people that hear us and take us into account. Recently, during our advocacy trip to Austin in January, we met with Commissioner John Hellerstedt of the Department of State Health Services about releasing these federal funds administered by the State; these monies will go a long way in assisting our Health Department to test for and prevent the spread of Zika.”

“These funds will assist with local testing for Zika virus and other infectious diseases, mosquito control, disease surveillance and education,” said Dr. Hector F. Gonzalez, MD, MPH, Director of Health, City of Laredo Health Department. “It will also allow us to spend more time in prevention assuring that women access health care early to prevent infection during pregnancy and to prevent birth defects.”
Congress provided 394 million to the CDC as part of the Zika supplemental funding bill. These funds were part of a $25 million federal allocation for Zika preparedness to the Texas Department of State Health Services (DSHS), about $10 million of which is flagged for local jurisdictions including 16 health departments. Those jurisdictions, including Laredo and Zapata County, were selected for their higher risk of Zika cases: mainly border, gulf coast, and urban areas. The City of Laredo will also conduct mosquito control operations in Zapata County with these funds.

Cameron County (Brownsville, Harlingen) is also getting Zika money.  But the Brownsville Herald reported it differently, with less fanfare.  (We get less money than they do, but we go big in our announcements.) 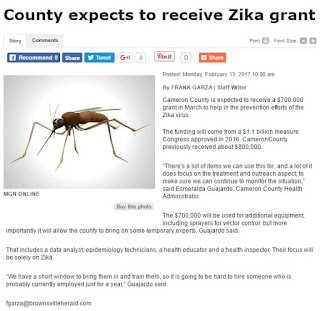 I'm starting to think that the photo ops that city hall and Henry Cuellar take part in are like Trump's executive order pressers.  They pose while holding up a prop in hopes of impressing all of us.
Posted by KeyRose at 7:40 AM No comments:

City officials went to Austin three days in January: the 23rd through the 25th.  They met with people, and more people.  And then they had a nice reception with hundreds of attendees. 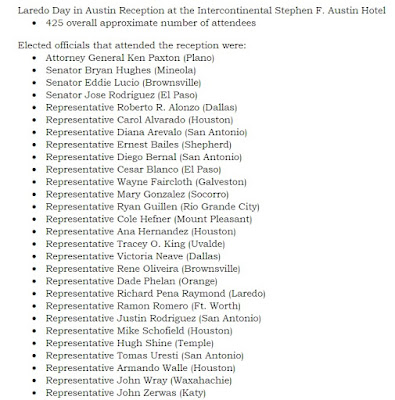 Of course, it was at a swanky place, the Intercontinental Stephen F. Austin Hotel.  Must be nice. 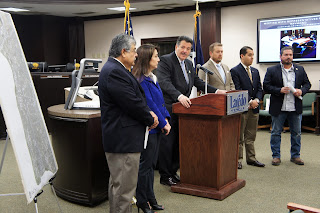 Images courtesy of the City of Laredo. 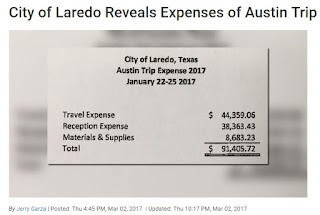 Money for expenses, according to the city, comes from departmental travel budgets, the Convention & Visitors Bureau, and private donations.  KGNS reported that 28 city employees went on the trip, as well as all of city council, except Roberto Balli.

$8,683 was spent on materials and supplies.  The itemized report provided by the City of Laredo included: $935 for souvenirs; $3,660 for ceramic bowls; and $4,088 for candies for trays and other supplies.
Posted by KeyRose at 4:00 PM No comments:

His Take On Religious Freedom

Laredo ranks at the bottom when it comes to acknowledging the rights of the LGBTQ community, according to Human Rights Campaign.  The LMT's Julia Wallace wrote that the city, along with its private sector, doesn't promote protections for those whose sexual identity is other*.

The mayor weighed in:


By all means, we're not here to discriminate against anyone.....They deserve every protection.

A welcoming gesture from the mayor -- until he goes all Hobby Lobby on us.


We're there, we care, we love.  But don't ask us to enable behavior that is against what we believe.  Religious freedoms should be first and foremost.  I think we should be able to protect those rights as well.  They're being pitted against each other, and I think we need to respect each other's views.

The mayor's religion first stance reminds me of the time when County Judge Rumitano Tijerina, in the summer of 2015, needed time to reflect, before deciding to marry gay couples in Webb County.  The Supreme Court had just ruled that gay marriage was constitutional, but Tijerina wasn't jumping on board with the decision all that quick.

Laredo's culture is ultra-conservative, taking their cues from the church.  Tijerina's and Saenz's faith plays well with the masses.  But when the mayor invokes religious freedoms, he's subtly espousing a means to discriminate towards the LGBTQ community.  The lack of mention towards the issue in the city's policy manual, and the mayor's duplicitous tone suddenly converge nicely to give us a well-deserved low ranking by HRC.  (not Hillary Rodham Clinton, but Human Rights Campaign)

Some time ago, city hall grappled with the issue of welcoming grant money to be used for women's contraceptive needs.  Council's moral arbiter, Charlie San Miguel, sided against the grant, while pointing to his religious views.  Juan Narvaez, in a stunning turn of clarity, said something to the effect of, we cannot proselytize our faith from the dais.

The Saenz's of the world made a conscious decision to throw their hat into the political arena, opting to represent ALL of Laredo or Webb County.  They need to advocate for all their constituents, not just the ones who share their point of view.  They need to understand that their take on religious freedoms can have real life, and economic consequences for the whole city, as well as for the most vulnerable among us.

Posted by KeyRose at 2:48 PM No comments: