Last week, Judge Jesus Garza relinquished his post.  He made if official. 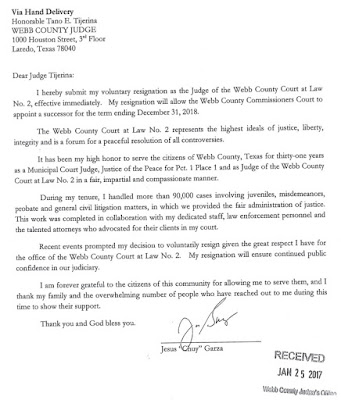 Posted by KeyRose at 1:49 PM No comments: 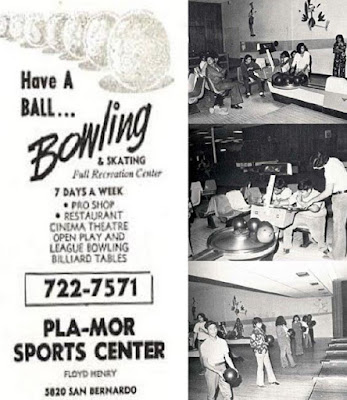 (Clipping from a Martin H.S. yearbook)

I never bowled at the Pla-Mor Sports Center.  Come to think of it, I never skated there either.  I do remember loitering around the premises, and occasionally taking in a movie, or taking a ride on the go-karts they had outside the facility.  That was a lifetime ago, like, Christopher Reeves-era "Superman."

Today I learned, through the LMT's obituary section, that Floyd "Hank" Henry passed away.  Sadly, the passing of his wife Shirley is also acknowledge in the obituary; they're pictured together.

The tribute reads as follows:


Their lives were filled with many adventures, buying the only bowling alley in Laredo, Texas in the 60's and continued building bowling centers throughout Texas until they retired in the early 90's.

I always thought that Roque Vela Sr. owned the Pla-Mor, but apparently it was Mr. Floyd Henry.  It would be nice to get more details about the facility.  I have some memories about it, but I don't remember when it closed or when I stopped going there.

Hopefully, with time, more pieces of information will come this way and I'll add to the legend of the Pla-Mor.
Posted by KeyRose at 2:36 PM No comments:

Judith Zaffirini got top billing in yesterday's Laredo Times.  Her words, regarding the Judge Jesus Garza extortion scandal, were put forth.


Following the indictment of local judge Jesus "Chuy" Garza, state Sen. Judith Zaffirini called his court "the absolute worst in the state" and a "textbook on cronyism"

Garza is alleged to have solicited money from an attorney in exchange for appointing said attorney to the case involving the C.Y. Benavides Jr. estate.  Judge Garza was indicted and turned himself in to authorities on January 12, 2017.

Zaffirini's comments are harsh.  Laredo politicians usually don't take on such a tone when opining on their peers' corrupt ways.  But counsel's words have been noted, and they'll serve for future reference.
The senator is adamant about having Judge Garza removed from the bench.  Again, a strong stance against a colleague, considering the man hasn't had the opportunity to state his case before a jury.  Her interest in this matter, however, has deeper ties.

Ah, and there it is, the connection.  Judith Zaffirini wants to throw her influence around by demanding that the judge be removed from office; And she's quick to point out all the reporting deficiencies in Judge Garza's office.  But she's in no hurry to recuse herself from a matter that her husband has a stake in.

Judge Jesus Garza's office may be the worst in the state, but who is Judith Zaffirini to want to tell people what to do when she has an obvious conflict of interest before her?  The senator has a lot of gall putting in her two cents worth.  Given her history with other people's estates, she should be the last one to chime in.

We have to trust that the justice system will judge "Chuy" Garza.  Judith Zaffirini's meddling we can do without.  She should stick to patting herself on the back and doing whatever it is she's used to doing.

Former Texas Governor Rick Perry met with the U.S. Senate Committee on Energy & Natural Resources today in order to determine if he's the man to lead the Department of Energy.  The hearing didn't take on a contentious tone.  I was surprised, however, by the focus staying largely on fossil fuels and renewable energy.

Coal is a source of energy, so you would think the subject is apropos to this sort of committee hearing, but the Energy Department's biggest concern is something else.  The New York Times clarified that the Energy Secretary is not a spokesperson for oil and gas (or coal):


In the days after, Mr. Perry, the former Texas governor, discovered that he would be no such thing — that in fact, if confirmed by the Senate, he would become the steward of a vast national security complex he knew almost nothing about, caring for the most fearsome weapons on the planet, the United States’ nuclear arsenal.
Two-thirds of the agency’s annual $30 billion budget is devoted to maintaining, refurbishing and keeping safe the nation’s nuclear stockpile; thwarting nuclear proliferation; cleaning up and rebuilding an aging constellation of nuclear production facilities; and overseeing national laboratories that are considered the crown jewels of government science.

Government science?  Ya chingo!  Perry is way out of his league on this one.

My district is rich with natural resources and with Governor Perry directing state energy policy we set records for job growth and increased revenue to our schools and small businesses," Cuellar stated.
Cuellar referenced the increase in the state’s energy production during Perry’s time as governor between December 2000 and January 2015.
"Under Governor Perry's leadership, Texas successfully increased oil production by more than 150% while simultaneously becoming the nation's leading wind energy producer, developed one of the largest natural gas basins in the entire country, and saw a massive expansion of solar energy,” stated Cuellar.
“Energy security contributes to our national security and I urge my colleagues in the Senate to vote yes on Governor Perry's nomination as Secretary of Energy."

It seems that Cuellar also doesn't know what the Department of Energy does.

It's important to mention Perry's role when he was governor of TX, but it's curious, to say the least, that Cuellar would not mention anything about our responsibility with nuclear weapons and nuclear waste.  Maybe he's not as smart as we think he is.  Cuellar is predictable in championing anybody from Texas, but his support is somewhat obscene when you think about Perry's regard for federal agencies in 2011.

In his famous "oops" debate moment of 2011, Rick Perry couldn't recall the (third) agency he would get rid of if elected president.  Apparently, the agency he would scrub from existence is the one he's now nominated for, Energy.  The laughable, and embarrassing blunder Perry made six years ago would disqualify anyone from consideration, I would think.  But this is Trump's world now, and it's going to be full of nonsensical shit piles for the foreseeable future.

Trump is fine with Perry.  And Perry is not ashamed of his huge mistake or his lack of understanding about government beyond our limits.  Y Cuellar?  Well, Cuellar proves that when life gives you lemons, you turn those lemons into political chips to cash in later, no matter how undignified or soulless it may be.  He too shows no shame in thinking Perry is qualified for this new task.

Perry has evolved in his thinking about government agencies; But that's mostly due to him not having anything of relevance to cling on to for the last several years.  If I had to speak well of him, I would only say that he's the right man for our time.  If confirmed as Energy Secretary, he'll fit right in with the Trump administration.

This writing was originally posted on FB last week.


I don’t know all that was said at yesterday’s meeting, where city officials gabbed about the city’s future, but apparently the mayor is amazed that Webb Co. is ranked as one of the nation’s poorest counties. He’s not cool with that, and neither am I. I don’t understand, however, how this can be a surprise to Mr. Saenz.
Mayor Saenz pointed to Laredo’s enviable unemployment rate, which is at 4.2 percent - low when compared to other TX border communities. That should spell success, right? But it doesn’t, ostensibly. The mayor wants to know what’s at the root of our poor ranking. Thankfully we have Councilman Roberto Balli to explain things: “The largest factor that contributed to this is the number of people who are undocumented.” Balli went on to say, “I’m not saying that in a negative way, I’m saying that in an economic way. They’re working, but they’re working for less than minimum wage.” (Julia Wallace, LMT)
Instead of going all Tea Party, or Alt-Right on the undocumented, I would instead say that people here have jobs, yeah, but not jobs that pay enough for them to own property like Mayor Saenz or Roberto Balli. I would say that people here are under-employed. I would say that Laredoans are living paycheck to paycheck, even the ones with good-paying jobs. I would say that our economy is retail/service-based. And I would suggest to Mayor Saenz, and especially Mr. Balli, that they should look up census statistics to get a sense of what sets our ranking as one of the poorest counties around. [I need to check up on this, but I don’t think a lot of the undocumented take part in census surveys.]
For every Danny Lopez, we have hundreds of wait staff that earn little money. For every Martha Washington dress maker, we have tens of thousands of people who can’t afford the extravagant debutante gowns. There is wealth in Laredo, and there are good-paying jobs too, but not everybody shares in that.
Posted by KeyRose at 7:17 AM No comments: 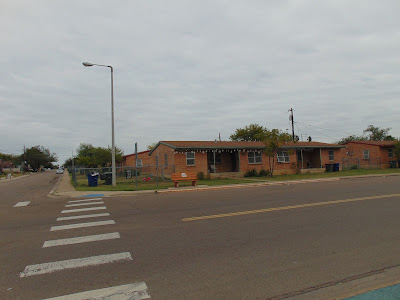 The crosswalk featured above is located on Springfield Ave. and Ash, at the northwest corner of Colonia Russel Terrace.  The designated crossing path is vital for students that attend Sanchez-Ochoa Elementary School, which is right across the street from the tan-colored community. 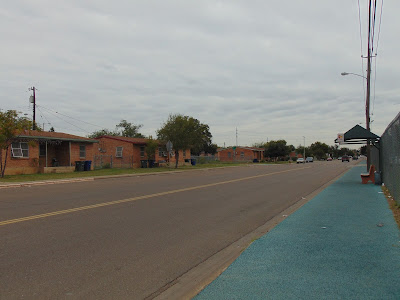 Russel Terrace is scheduled to undergo major changes.  Residents will be relocated as the housing units will be readied for demolition.  Will keep an eye on this.
Posted by KeyRose at 8:21 AM No comments:


January 31, 1893 Samuel Jarvis passes; considered the father of Laredo Republican Party.
Posted by KeyRose at 11:44 AM No comments: