You Got My Money?

It was October 29, 2014 that Esteban Rangel signed an AGREEMENT TO REIMBURSE contract with the City of Laredo.  The promissory note listed the terms by which he was going to pay back the money he had been pocketing illegally.  To recap: Rangel was promoted to Director of Transportation by LISD while receiving a paycheck as a city council member.  In some instances, state law prohibits a person from being compensated simultaneously by two government agencies.

Rangel lost his primary race for commissioner earlier this year.  He vacated his council seat, but still had thousands to repay to the city.  (Total repayment was $14,200.00.)  La Sanbe news headquarters got word last week that the city is still trying to figure out what course of action to take to get their money back. 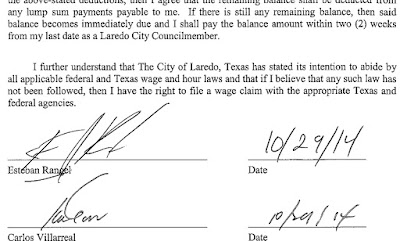 Both parties are in this mess because of a simple oversight -- Rangel didn't know any better and the city learned of his new position and compensation a little too late.  Blunders aside, Rangel needs to do right by the city.  The City of Laredo wants its $8,000 and its patience is wearing thin.