War Of The Rosas 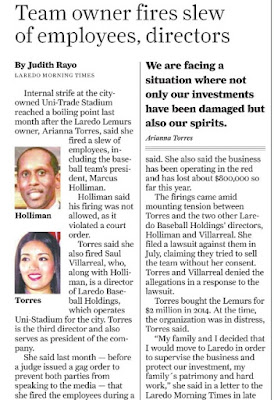 The headline in yesterday's LMT issue was: Declining Game Attendance.

To say that the Lemurs organization is in complete disarray would be an understatement.  Team management has, ostensibly, made life a 'living hell' for majority owner Arianna Torres.  It's been a little over three years that the Lemurs played their first game in Laredo, but already we have stories of disgruntled employees, infighting between management, police responding to Uni-Trade Stadium to settle disputes, and a lawsuit.

Warring parties were due in court today to present a plan on how to work together.  That was the directive from the last court hearing.  (I think this was Judge Hale copping out in this matter:  adults, you work it out amongst yourselves and I'll sign off on it.)  But it's apparent that Holliman, Villarreal and Torres have a case of irreconcilable differences.

A lot of money has been poured into this baseball venture, and all we have to show for it is a bad drama that makes for juicy headlines.