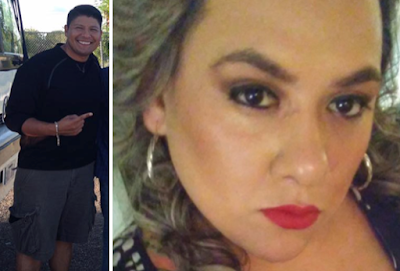 The sun is almost down on the last day of 2016, but I have a chance to compose one more thing for the year.  I had not done a Person of the Year post in a while.  For the first time I'm doing a duet feature write-up.

My 2016 Person(s) of the Year are Esteban Rangel and Priscilla Villarreal Trevino, alias La Gordiloca.  These two deadbeats had a less-than-stellar 2016.  The year was a downer on several fronts, but for this dynamic duo, '16 stung a little extra.

Esteban Rangel tied political newbie Jesse Gonzalez in the March primary for county commissioner.  There was a runoff election and a recount to boot, but Rangel just couldn't eke out a win.  By Independence Day, Rangel should've been an afterthought.  Alas, he never finished paying the City of Laredo the money he owed, so his name remained relevant.  I have a theory: he doesn't have any intention of paying the $8,000.00 back.  If the city sues him for it, he's prepared to spill some beans.  It sounds crazy, I know.  But let's wait and see.

He was spotted doing some Christmas shopping in town, without a care in the world, apparently.

La Gordiloca, like Rangel, owed money too in 2016, but for different reasons.  The 'online celebrity' made some defamatory statements against a local daycare.  A court ordered her to pay close to $300,000.00 in damages.  Pues, esta ruka doubled down and said, no se vayan a rallar. (paraphrasing)

In print press, she made it known that she wasn't going to fork over a penny to the owners of the daycare.

Rangel and Villarreal Trevino ended up being Laredo's most recognizable delinquents.  And for that they are La Sanbe's Person(s) of the Year.

We'll hear more about these two ego-driven natives, unfortunately.  For now, stay safe and have a Happy New Year!