Local media outlets reported yesterday on the passing of David Cortez.  He died Monday in San Antonio at the age of 82.

Cortez's son was quoted in the LMT (Taryn Walters) today: "He was a wonderful family man.  He loved his community and served it well."

Cortez is remembered for his many years of service to the community.  He served as council member, and county commissioner, until his sudden departure from politics in 2005.  Then-County Judge Louis Bruni made the announcement to the media that David Cortez resigned because of health issues.  Bruni appointed Cortez's daughter to fill the commissioner's seat.

Two months after leaving his post, David Cortez was convicted of funneling bribes to several commissioners in Willacy County.  Cortez cooperated with prosecutors and was sentenced to three months in prison, to be followed by house arrest.

David Cortez may have been a good friend to some, and a wonderful family man, but his lasting legacy will be that of convicted felon.  He'll go down in local history as one more politician who worked the system to his advantage. 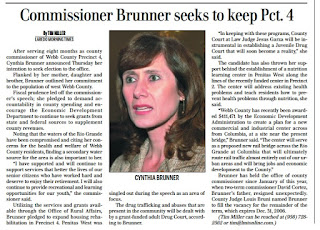