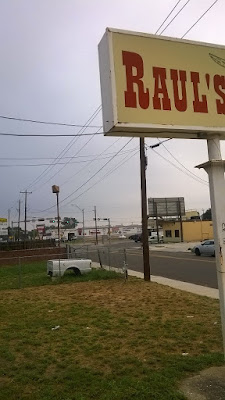 I tweeted out this photo the other day.  I arrived at this spot Saturday morning after my original food-purchasing plan fell through.  What that means is that Taco Palenque had a long line at the drive-thru, so I went to Plan B: getting down for tacos at Raul's BBQ.

An old man was off to the side, selling tamales out of his rolling basket.

The photo above will go down, for now, as another meaningless moment in time.  In five years, however, its meaning, its significance will change.  Something will be different.
Posted by KeyRose at 9:36 AM 2 comments:

As The Wind Goes 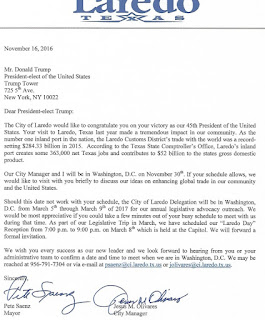 Earlier this month, Mayor Saenz and Mr. City Manager sent President-elect Trump a congratulatory letter.  Fawning was dished out in spades: Your visit to Laredo, Texas last year made a tremendous impact in our community.  End quote.  I don't know how Trump made Laredo great again, but our city leaders are desperately looking forward to working with Donald and his team.

When Mayor Saenz was asked in March who he would vote for, he hedged.  I can't read the mayor's mind; I can only look to his conservative hairdo to answers to the nagging voting question.

Posted by KeyRose at 3:12 PM No comments:

Will Watch For Results

Races of interest for me: Election 2016

It Once Took Place On A Thursday 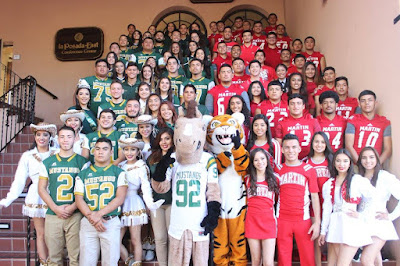 Laredo's storied rivalry is getting a lot of attention as Martin and Nixon prepare to do battle on the football field once again.  To promote good sportsmanship, I suppose, coaches, football players, and cheerleaders from both schools were treated to breakfast at a reception hall next to La Posada Hotel yesterday.

The morning event is apparently known as the "Friendship Breakfast."  And the game itself is now billed as "The Hammer Bowl."  That title not only bestows a certain gravitas on the final game of the season; but the winner has the honor of receiving a blunt force object as a token for their victory.

I appreciate the fact that district officials are promoting goodwill between foes, but the cues that are being put in front of us have a more hostile character. 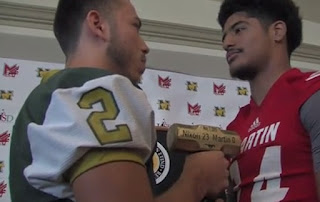 The whole spectacle is being presented like it's a boxing main event.  I think it's all a bit over the top.
We had fun when it was our turn to go up against our crosstown rivals, but I don't remember it reaching this kind of fever pitch.  The most I recall from the 80s is having a bonfire the week of the game.  And then on the eve of the match, we would load up on a flat bed (semi truck) and parade through the neighborhood, making a lot of noise in the nearest barrio.

Now the game is going to be shown live on the CW channel.  It's all fine and good, but what does that do for the psyche of the Cigarroa student body.  The 3rd LISD high school is not even an afterthought this time of year.

Perhaps this extravaganza is appropriate for this day and age.  The pomp that has evolved in the last ten, fifteen years, however, has certainly made this more than what it actually is: just another game.  What will it look like ten years from now, though?

Stylized game aside, let's look back at some of this game's history.

Shirley Field became the official site of the rivalry game in the mid 1970s.

In the fall of 1988, the Martin/Nixon game coincided with the release of "Rattle and Hum" at a local movie theater.  (That one is a useless bit of trivia) 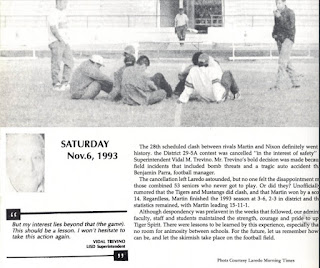 After that season, for safety's sake, games would take place on Saturday afternoons.

In June of 2008, the football schedule revealed that the Martin/Nixon game would be played on August 30, due to Nixon's designation as Class 4A.

In November 2010, the game was played at the UISD Student Activity Complex.  The new Shirley Field was still not ready.

May the best team win.

On This Day In November